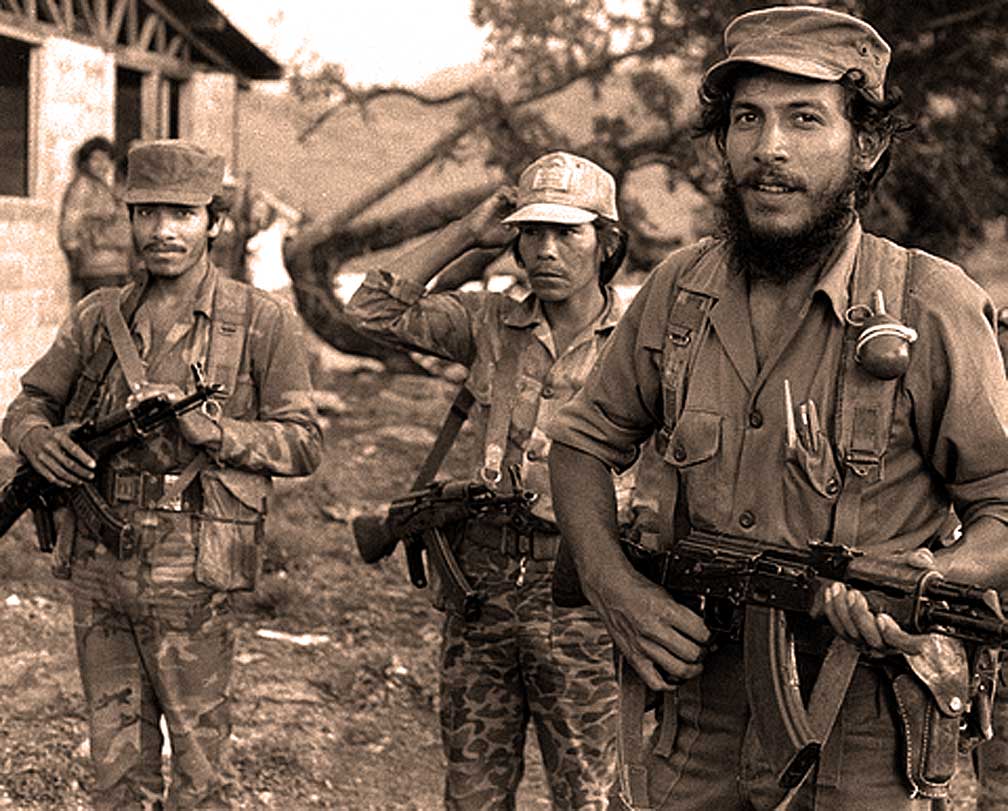 Sandinista rebels: This rag-tag bunch of lefties was getting on the White House's nerves in a big way.

January 15, 1984 – Bringing Central America To The Boil – And The Word Is Sandinista.

Sandinista rebels: This rag-tag bunch of lefties was getting on the White House’s nerves in a big way.

Thirty-seven years ago this week, the simmering stew of politics and saber-rattling hit the boiling point in Central America. With news that a U.S. Helicopter had been forced down near the border between Honduras and Nicaragua and claims that Sandinista rebels killed the pilot after he stepped out of the helicopter and that the downed helicopter was clearly in Honduran territory. Charges and counter-charges ensued. Denials and counter-denials ran rampant in diplomatic quarters. And all on the same day the Special Commission on Central America, headed by Henry Kissinger issued its findings in a 132 page report to the White House, concluding that U.S. security in the area was being challenged by a Soviet-Cuban alliance. The panel recommended a quick infusion of military aid to El Salvador and a five-year $8 billion economic aid program for the region. Since not all parties of the commission were in agreement on the solution, the problem was still up in the air. And the world learned a new word: Sandinista.

But military incidents weren’t the exclusive property of Central America this week. A group of Marines was fired on when their helicopter landed in downtown Beirut this week in 1984, killing one Marine and making it 262 killed since the first Marine contingent of Peacekeepers landed in Lebanon some 17 months earlier.

Senator John Tower, heading up a commission looking at our involvement in Lebanon arrived back in Washington and concluded that our withdrawal from Beirut would have a disastrous effect on the region and the Middle East in general. He also added that he didn’t think moving the Marines from their position at the Beirut airport would make them any safer.

And Navy flyer Lt. Robert Goodman, who was recently released by the Syrians, arrived back at his hometown in Portsmouth, New Hampshire to an enthusiastic welcome home. The man who engineered his release, Jessie Jackson, was cheered by well-wishers when he accompanied Goodman home.

It was disclosed this week in 1984 that after 117 years the U.S. and The Vatican would resume full diplomatic relations. The joint announcement came at a time when Pope John-Paul II was becoming more and more involved in world affairs. The announcement wasn’t met with unanimous joy – it was roundly condemned by Protestant, Jewish and Civil Liberties groups who said it entangled the U.S. in affairs of the Catholic Church and that it did not preserve the separation of Church and State.

And consumer groups were protesting Nutrasweet not mentioning the fact their product contained Saccharine, a product linked to Cancer in lab animals.

All this, and so much more happened during the week ending on January 15th 1984, as reported by ABC Radio’s World News This Week.