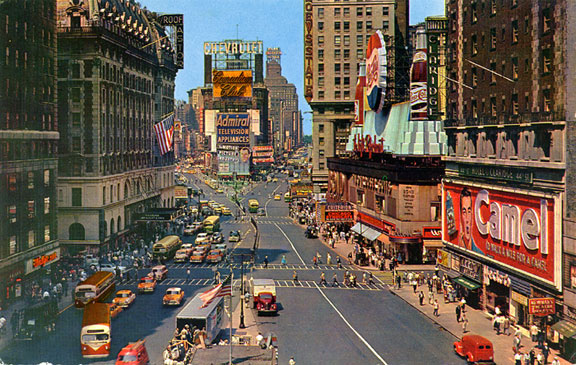 It's a safe bet that 98% of the sounds that represented New York in 1956 don't represent New York today.

You support is always enormously appreciated: Become a Patron!

In the 1950’s, reel to reel tape recorders were the equivalent to iPhones today. Everybody had to have one and everybody felt the overpowering need to record everything imaginable.

Some people took it to the level of art form, preserving sounds certainly to be forgotten about in the near-distant future. One of those artist/preservationists was Tony Schwartz, who took something seemingly as mundane as recording the sounds of a city to an exciting level of discovery.

On March 2, 1956, The CBS Radio Network as part of their CBS Radio Workshop series ran a piece by Tony Schwartz called The Voice Of New York. It was an audio journey around Manhattan, capturing the sounds of a city and the people who were part of it.

Without a doubt, most of those sounds associated with the New York of 1956 are gone in 2013. They’ve been replaced by other sounds and other people. Much the same way people and situations are different now than they were in 1956. The world is just different and a lot of those sounds so closely associated with a period of time seem completely foreign and incomprehensible to us now.

Even in 1956, The Voice Of New York captured a lot of imaginations. It was such a popular broadcast that Folkways Records released it on disc a few months later.

Now it’s offered as a curio of sorts – a glimpse into a time long past and a reminder of just how things change after all.

However, watching with your ears is a lot more fun that having it all spelled out for you in pictures.