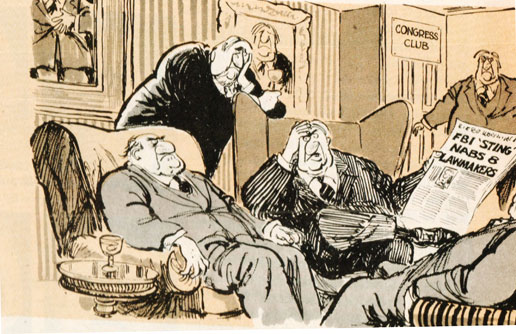 Ethics in Congress under scrutiny - how unusual.

ABSCAM and Ethics in Congress under scrutiny – how unusual.

On this February 4th in 1980, a new Acronym entered our Dictionary –ABSCAM, which stood for Abdul Enterprises Scam or Arab Scam implicated at least 8 Senators and Congressmen over accepting bribes in exchange for favors.

Denials and hand-wringing went into swift action, but questions arose when it was learned the Media somehow leaked the story well before the FBI was planning on releasing its findings. Fingers were pointing at the FBI, saying the leak came from them. Others questioned the validity of tax payers money being used to entrap members of Congress into violating the law. But the fact remained – once again, Congress came under scrutiny for ethics violations.

In other news – Vietnam forces were continuing their drive into Cambodia and running into an onslaught of refugees trapped in the middle of the fighting.  Negotiations were still going on for the release of the American hostages in Iran, going into their fourth month of captivity. Talks were also going on in Pakistan over U.S. military aid to that country, in light of the recent invasion of neighbor Afghanistan by the Soviet Union. Latest reports were Pakistan President Gen. Zia claimed the Carter White House offer of $400 million in aid was “not enough”. U.S.Military advisers were in Islamabad to assess Military needs of the Pakistani government.

Sen. Ted Kennedy, campaigning for the 1980 Presidential ticket, slammed the Carter Administration for failure to bolster a military presence in the Persian Gulf, in light of the hostage situation. Governor Ronald Reagan continued his campaigning by making appearances in New Hampshire to shore up lagging support in front of the Primaries being held there.

The Teachers in Chicago went on strike this day, shutting Chicago Schools. Also feared was a looming strike by Chicago Firefighters.

Reports that at least 32 inmates were killed in weekend rioting at the New Mexico State Prison in Santa Fe. As news began to surface, reports of over-crowding and understaffing surfaced, along with additional reports of drug overdoses and torture-mutilation killings of inmates. It was to be considered the worst rioting in a prison since the Attica uprising of 1971. New Mexico Prison authorities claimed the prison would not be re-opened, as an estimated $10 million in damages made the prison virtually useless and it would need to be torn down.

And demonstrators in Libya stormed and set on fire the French Embassy in Tripoli. All Embassy personnel escaped unharmed.

And that’s just a sample of what went on in this world, February 4th 1980 as reported by the CBS World News Roundup, CBS Hourly News and The World Tonight.