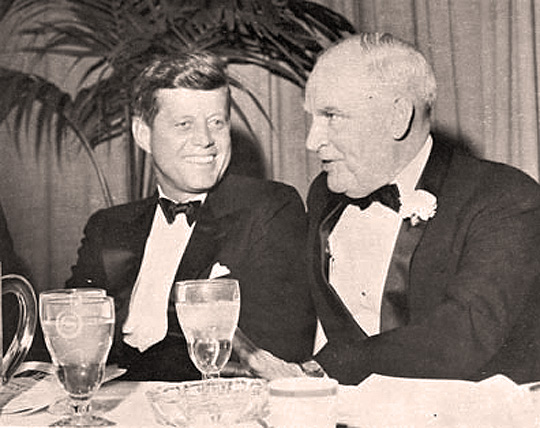 Commerce Sec. Luther Hodges with his Boss. The subject was the Economy.

February 5, 1961 – The Economy: In Good Shape At The Moment – In Bad Shape Comparatively –

Commerce Sec. Luther Hodges with his Boss. The subject was the Economy.

February 5, 1961 – Forever The Economy – even in 1961. It was about jobs, lack of jobs, where we were compared to the rest of the world. Were we lagging behind. Were we still Number One. Where were we heading. President Kennedy, in his State of The Union speech delivered earlier, addressed the issue of the gloomy Economy, and offered a plan to Congress to relieve unemployment and to speed up economic growth. And the Government Agency most closely aligned with the economy was the Department of Commerce.

So on this day in February, 1961, newly appointed Secretary of Commerce Luther H. Hodges sat before a panel of journalists on Meet The Press and answered the burning questions of the day, and he was the first of the JFK Cabinet to do so.

In 1961 Luther Hodges was appointed as United States Secretary of Commerce under President John F. Kennedy, serving until 1965. He returned to North Carolina and served as chairman of Research Triangle Park, a major facility established during his tenure as governor.

How we were doing in comparison to the rest of the world was, according to Hodges “better at the moment” but Western Europe was quickly catching up and were, in fact, doing better as far as employment of workers than the U.S. was. Our unemployment figures weren’t looking good. We were, putting it bluntly, in a recession. And no matter how Hodges was trying to put a spin on things, we weren’t doing well and this would be a major hurdle for the new administration to deal with.

And so rolled The New Frontier and a full plate of issues, that first 100 days.

Here is that Meet The Press episode from February 5, 1961.