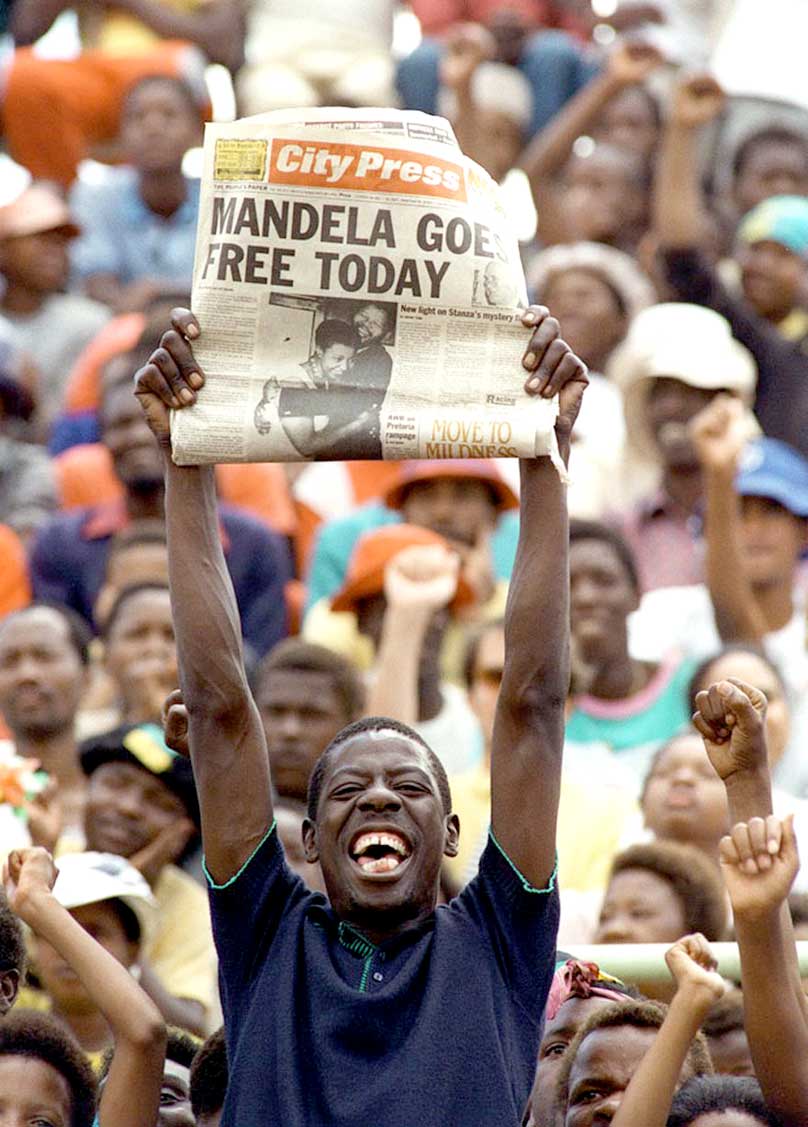 A sea of faces greeted him.

Nelson Mandela freed – A sea of joyous faces greeted him.

Events moved quickly in 1990, culminating in the release from Prison of Nelson Mandela on February 11, 1990.

A crowd of some 50,000 supporters assembled outside the Courthouse in Cape Town to greet the arrival of Mandela, who had been imprisoned over 27 years for his efforts to end apartheid and discrimination in South Africa and to end minority rule.

A Xhosa speaker, Mandela was born to the Thembu royal family in Mvezo, Union of South Africa. He studied law at the University of Fort Hare and the University of Witwatersrand before working as a lawyer in Johannesburg. There he became involved in anti-colonial and African nationalist politics, joining the ANC in 1943 and co-founding its Youth League in 1944. After the National Party’s white-only government established apartheid, a system of racial segregation that privileged whites, he and the ANC committed themselves to its overthrow. Mandela was appointed president of the ANC’s Transvaal branch, rising to prominence for his involvement in the 1952 Defiance Campaign and the 1955 Congress of the People. He was repeatedly arrested for seditious activities and was unsuccessfully prosecuted in the 1956 Treason Trial. Influenced by Marxism, he secretly joined the banned South African Communist Party (SACP). Although initially committed to non-violent protest, in association with the SACP he co-founded the militant Umkhonto we Sizwe in 1961 and led a sabotage campaign against the government. He was arrested and imprisoned in 1962, and subsequently sentenced to life imprisonment for conspiring to overthrow the state following the Rivonia Trial.

On 12 August 1988 he was taken to hospital where he was diagnosed with tuberculosis. After more than three months in two hospitals he was transferred on 7 December 1988 to a house at Victor Verster Prison near Paarl where he spent his last 14 months of imprisonment. He was released from its gates on Sunday 11 February 1990, nine days after the unbanning of the ANC and the PAC and nearly four months after the release of his remaining Rivonia comrades. Throughout his imprisonment he had rejected at least three conditional offers of release.

As a reminder of the moment and how it electrified a nation and the world, here is that address from the steps of the Courthouse in Cape Town on February 11, 1990.