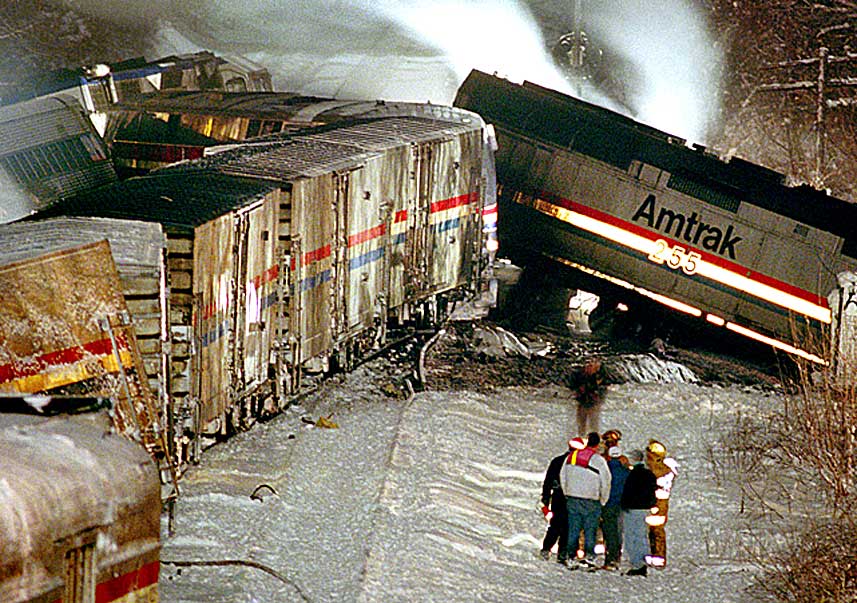 News for this February 17th in 1996 started off with a grim report of a collision between trains had taken place just outside of Washington D.C., killing at least 11 people, most were  trainees for the Job Corps Program heading to Washington D.C. from a training Center in West Virginia.

In other news – a jury in Boston awarded a man more than $19 million over a 1990 collision involving the man’s wife and children who were killed when their Plymouth Voyager Minivan was involved in an accident where a design defect caused the rear brakes to lock-up before the front brakes, thus sending the minivan out of control. Paul J. Santos Jr., a 52-year-old engineer, was awarded $12.8 million in compensatory damages plus $6.4 million in interest and about $15,000 in punitive damages–the cost of the 1986 minivan.The jury found Chrysler was negligent in addressing a faulty design. Chrysler said they would appeal.

An emergency Summit meeting in Rome began between the warring Balkan nations aimed at ironing out disputes among the countries over the Bosnian Peace Accord. At issue was equal treatment for Bosniacs, Serbs, Croats and Others in Sarajevo. As well as equal opportunity and non-discrimination for all peoples and citizens of Sarajevo, as well as for all citizens of all regions of Bosnia and Herzegovina.

Meanwhile, the 1996 Presidential campaign was in full swing. President Clinton called for changes in Campaign financing and the influence of Big-Money on the campaigns. Republican Presidential hopeful Bob Dole was busy campaigning ahead of the New Hampshire Primary. He blasted Clinton for vetoing the Republican-sponsored  Welfare Reform Bill, while blasting his Republican opponents for other issues.

All that was leading up to a crazy week of campaigning and candidate-bashing in what was turning out to be another exhausting week in Politics.

And all that, and so much more made up the news for this February 17th in 1996 as reported by NPR and Weekend Edition along with commentary on the week’s activities from Daniel Schorr.