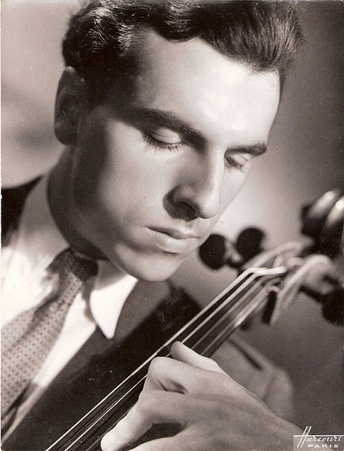 Rescuing and preserving take a village: Become a Patron!

Back to Paris tonight for a 1st French performance of the Concerto for 2 Cellos and Orchestra by Paul Tortelier. The Concerto was originally premiered in Germany in 1951, but since there is no date on the transcriptions I have, it’s assumed this is the first French performance, as it is recorded in concert and featuring Paul and Maud Tortelier with The French National Orchestra conducted by Andrè Cluytens.

Paul Tortelier was a product of the Paris Conservatoire, studying cello there with Louis Feuillard and Gérard Hekking, while also tying for a first prize in theory with fellow student and future composing great Henri Dutilleux. A succession of principal cellist positions followed: Tortelier played with the Monte Carlo Philharmonic, the Boston Symphony under Koussevitsky, and in orchestras in Paris and London. After World War II, he established an active solo career, especially in Europe. In the 1950s, he enjoyed the signal honor of playing principal at Pablo Casals’ festival in the French village of Prades, also performing chamber music there with fellow artists including Szigeti, Stern, and Grumiaux.

Although as a cellist Maud Tortelier possessed uniquely precious qualities of her own, she willingly subjugated her professional ambitions to those of her husband. She was fond of telling the story of how it all began:

The Premier Prix – the final exam before graduation at the Paris Conservatoire – included a ‘Morceau Imposé’, a new composition that none of the candidates could have studied beforehand. In Maud’s final this was an acrobatic piece requiring a large hand to facilitate wide extensions in thumb position. Maud’s hand, as she never missed an opportunity to remind us in later years, was small! Her chances presumed scuppered, her classmates lined up to commiserate. One member of the jury however, captivated by the graceful abandon with which, by necessity, she leapt elegantly around the instrument, preferred her playing to the others. This was the composer of the Morceau Imposé – Paul Tortelier. The rest is history.

As with all of the French Radio material, I am not sure this particular performance has been reissued. But even if it has, it’s a premier of a work by a composer long thought to be only a legendary Cellist.

No end to discoveries, it seems.