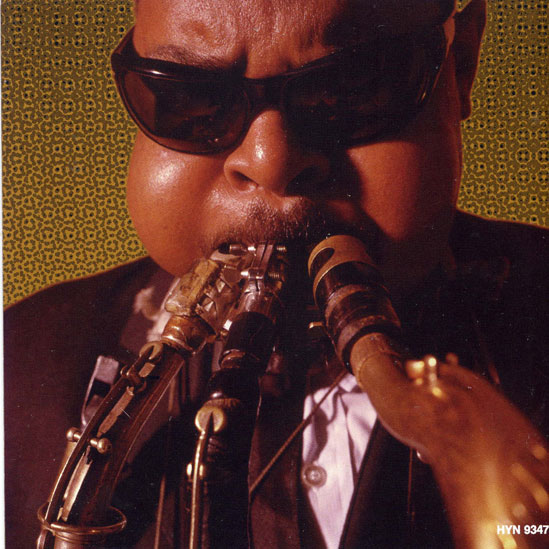 Rahsaan Roland Kirk - Not content with playing one sax at a time - he had to play three, and sometimes more.

Rahsaan Roland Kirk – Not content with playing one sax at a time – he had to play three, and sometimes more.

The Great Rahsaan Roland Kirk this weekend. From the 1962 Newport Jazz Festival and rebroadcast some years later.

Kirk’s musical career spans from 1955 until his death in 1977. He preferred to lead his own bands and rarely performed as a sideman, although he did record with arranger Quincy Jones, drummer Roy Haynes and worked with bassist Charles Mingus. One of his best-known recorded performances is the lead flute and solo on Jones’ “Soul Bossa Nova”, a 1964 hit song re-popularized in the Austin Powers films.

Kirk’s multi-instrumentality was credited as having a substantial musical conception. This inclusivity included blues music, a love of stride piano and early jazz, and an appreciation for pop tunes. But his vision was much wider than most of his contemporaries. According to producer Joel Dorn, he was also hugely knowledgeable about classical music. Pieces by Saint-Saens, Hindemith, Tchaikovsky, Dvorak and Villa-Lobos would all feature on his albums over the years, alongside standards, pop songs and original compositions. Rahsaan’s influences went beyond jazz and consequentially, he preferred the term ‘Black Classical Music.’

His playing was generally rooted in soul jazz or hard bop, but Kirk’s knowledge of jazz history allowed him to draw from many elements of the music’s past, from ragtime to swing and free jazz. Kirk also absorbed classical influences, and his artistry reflected elements of pop music by composers such as Smokey Robinson and Burt Bacharach, as well as Duke Ellington, John Coltrane and other jazz musicians. The live album Bright Moments (1973) is an example of one of his shows.

Kirk played and collected many musical instruments, mainly multiple saxophones, clarinets and flutes. His primary saxophones were a standard tenor saxophone, stritch (a straight alto sax lacking the instrument’s conventional upturned bell), and a manzello (a modified saxello soprano sax, with a larger, upturned bell). A number of his instruments were exotic or homemade. Kirk modified instruments himself to accommodate his simultaneous playing technique. Critic Gary Giddins wrote that Kirk’s tenor playing alone was enough to bring him “renown”.

Apparently Mercury Records recorded this entire concert to issue shortly after, but never got around to it. And when they did, only released two tracks from the concert.

This weekend you get to get to hear what they left out. The announcer microphone apparently wasn’t going through the band mixer, so the announcements are distant though the band is quite up-front, as you quickly find out when they start. The mix settles down after a minute or so. Live concerts, mixing by the seat of your pants at times.

Here is that memorable concert from the 1962 Newport Jazz Festival featuring The Rahsaan Roland Kirk Quartet.