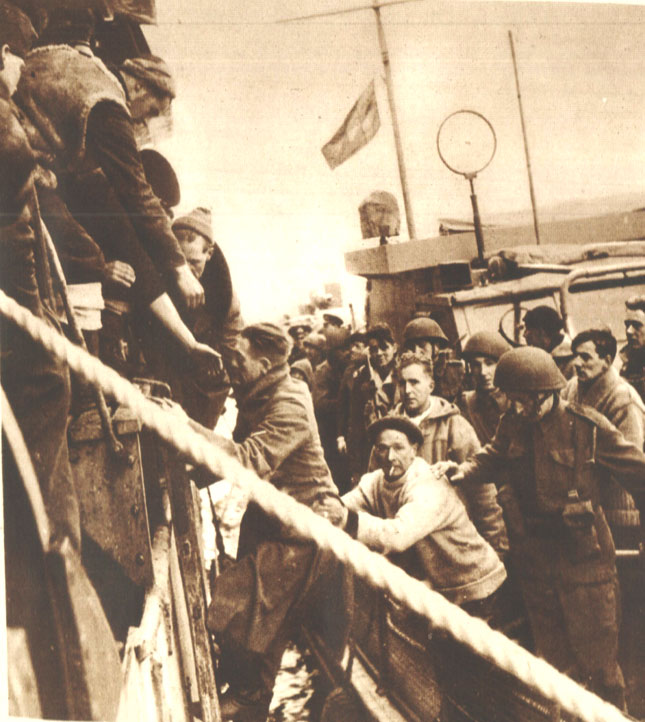 Loading German Prisoners after Commando Raid - It wasn't much, but it was the morale boost everyone talked about.

Loading German Prisoners after Commando Raid – It wasn’t much, but it was the morale boost everyone talked about.

In a day where news of an estimated 100,000 Japanese troops landed on Java, word of continuing attacks on Port Moresby and one inch closer to a threatened invasion of Australia, the nighttime raid on France by British Commandos came as a morale boost for the British people.

On the night of 27 February, after a period of intense training and several delays due to poor weather, a company of airborne troops under the command of Major John Frost parachuted into France a few miles from the installation. The main force then assaulted the villa in which the radar equipment was kept, killing several members of the German garrison and capturing the installation after a brief firefight.

An RAF technician with the force dismantled a Würzburg radar array and removed several key pieces, after which the force withdrew to the evacuation beach. The detachment assigned to clear the beach had initially failed to do so, but the German force guarding it was soon eliminated with the help of the main force. The raiding troops were picked up by landing craft, then transferred to several motor gunboats which returned them to Britain.

The raid was entirely successful. The airborne troops suffered relatively few casualties, and the pieces of the radar they brought back, along with a captured German radar technician, allowed British scientists to understand enemy advances in radar and to create countermeasures to neutralise them.

Taking the German army by surprise and taking prisoners before skipping back across the channel was just what everyone needed to hear, from London to Washington. It wasn’t a major invasion by any stretch and it didn’t do very much damage, but it was the notion that Britain struck back at a time when public sentiment was questioning how well the British government was waging the war finally struck a positive note to the average Briton on the street.

Coupled with news of daylight RAF raids over French munitions factories near Paris and some successful advances in Egypt, the sting of potentially devastating loses in the Pacific seemed somehow bearable.

But for this March 1st in 1942, the war was dragging on, as reported by the Blue Network of NBC via their News Of The World.

And there was no end in sight, so any good news of any kind was a morale boost.