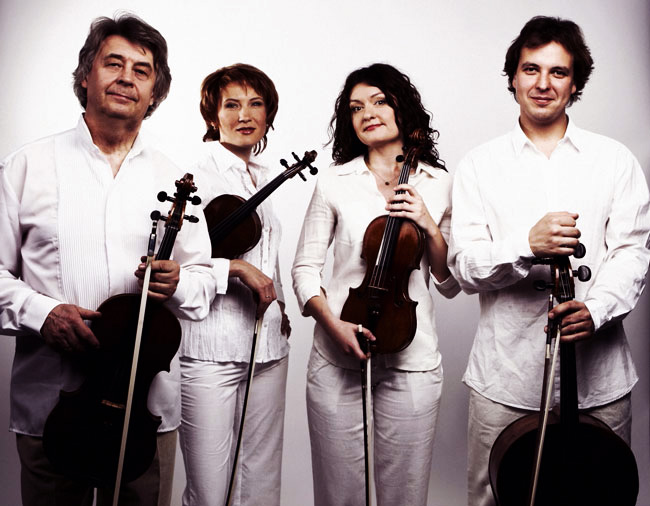 New Rusian Quartet. Referred to as a "magical sounding" quartet.

Over to the Moscow Conservatory Auditorium for a concert by The Russian Quartet along with Alexei Volodin in music of Brahms. It was recorded on May 6th 2013 by the venerable Radio Orpheus in Moscow.

The Rusian Quartet have been praised as everything from Magical to the “best Quartet in Russia”, and their reputation is well-deserved.

Pianist Alexei Volodin was born in St. Petersburg, and began taking piano lessons there at the age of nine. A year later he moved to Moscow, where he studied first with Irina Chaklina and later with Tatiana Zelikman at the Gnessin Music School. In 1994 he enrolled at the Moscow Conservatory and at the end of his studies there in 2001 in the master class of Professor Eliso Virsaladze. 2001/2002 he rounded off his studies at the Theo Lieven International Piano Foundation in Como, Italy.

He was the winner of the 9th Concours Géza Anda in Zurich in 2003.

Volodin looks back on a remarkable career: he gave recitals all over the world, and has performed with prestigious orchestras, such as the Sydney Symphony, the Orchestra della Radio Svizzera Italiana, the SWR Radio Symphony Orchestra, the St. Petersburg Philharmonic Orchestra, the Orchestra of the Mariinsky Theater, the NDR Radio Philharmonic Orchestra Hannover, Gewandhaus-Orchester Leipzig, the Orchestre du Capitole de Toulouse, the Moscow Tchaikovsky Symphony, the Orchestra of the Deutsche Oper Berlin and the Tonhalle Orchester Zurich. He has worked with conductors like Riccardo Chailly, Mikhail Pletnev, Eiji Oue, Gerd Albrecht, Carlo Rizzi, Zoltan Kocsis, David Zinman, Valery Gergiev and Vladimir Fedoseyev, among others.

So for the next hour or so, you get to hear what the noise is all about.

Here’s what’s on the program tonight (via the Radio Orpheus website with English “gist” translation):

May 6 at the Concert Hall of Radio “Orpheus” – the music of Johannes Brahms. Artists: New Russian Quartet and Alexei Volodin (piano). In the program: String Quartets Op. 51 number 1 in C Minor, № 2 in A minor and the Piano Quintet Op.34 in F minor. The concert was held in the Art Festival “Art-November.”

According to the Italian press, their playing is “magical”. I would go along with that.

And for a mid-week Anti-Road Rage Wednesday, that seems a pretty apt assessment.

BTW: Announcements are in Russian and there was a lengthy interview with first Violinist Julia Igonina which I removed for time considerations.