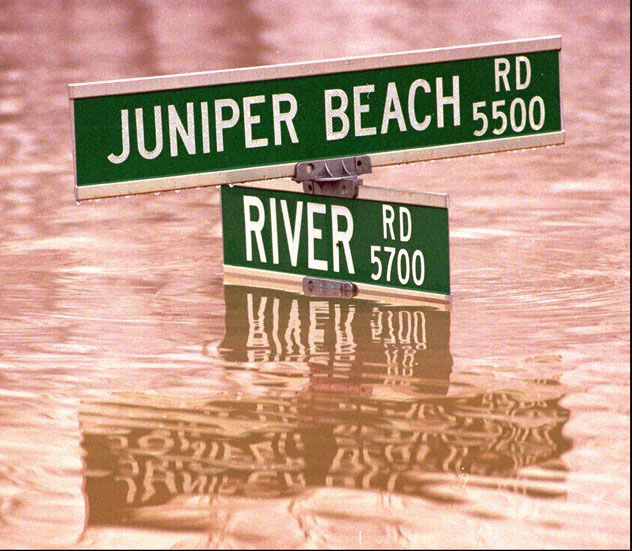 If you lived here you'd be miserable right now.

The Floods of ’97: If you lived here you’d be miserable right now.

Characterized as the worst flooding since the infamous Ohio River Valley floods of 1937, the Ohio River Valley Floods of 1997 were causing no end of havoc to countless towns and villages, submerged in water for yet another day. National Guard troops had been called out to aid in the cleanup and damage control as residents tried to get a handle on the sea of mud, debris and water they were faced with.

In other, less soggy news, this March 5th in 1997 – President Clinton sought to deny the sale of guns to Foreign visitors, that the right to keep and bear arms didn’t extend to Foreigners staying in the country less than 90 days. This, based on the incident on the Empire State Building, where a Palestinian tourist started firing at crowds on the Observation deck.

The KKK was heading to court to try and overturn a denial of permit to stage a Rally in Pittsburgh in April. The city argued the Klan was attempting to stir up racial tensions in the city and the Klan smugly claimed they were “exercising their First Amendment Rights“. Yeah, uh-huh, sure.

Speaking of court cases – a flurry of sexual harassment and discrimination cases were heading to court this day. Everything from inappropriate questioning at Mitsubishi to Avis reportedly refusing to rent cars to Jewish organizations. Lots of bad behavior going on.

It was Day Number 3 for Anti-nuclear demonstrations turning violent in Germany.

Fighting in Zaire was flaring up, as was violence in Albania.

And Pianist David Helfgott, who was portrayed in the Oscar nominated film Shine, staged his Carnegie Hall debut. The critics gave it a drubbing, but the sold-out audience went predictably nuts.

And that’s what the world mostly looked like on this March 5, 1997, as viewed by The CBS World News Roundup.