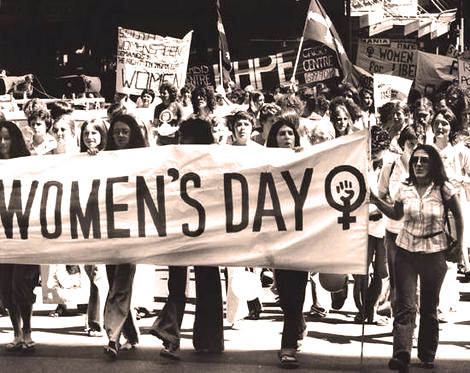 As a reminder of the protests, the struggle and the message on this International Women’s Day, Here is an excerpt of the Women’s March in New York City, as relayed by WBAI and its day-long live broadcast on August 26, 1970.

It would be optimistic to look back on this period of history with a sense of the curious, and consider, with a sigh of relief how much things have changed for Women in those four decades. However, the events of the past several months seem to prove otherwise. Very little, in fact has changed.

International Women’s Day has been commemorated in a variety of ways worldwide; it is a public holiday in several countries, and observed socially or locally in others. The UN observes the holiday in connection with a particular issue, campaign, or theme in women’s rights. In some parts of the world, IWD still reflects its political origins, being marked by protests and calls for radical change; in other areas, particularly in the West, it is largely sociocultural and centered on a celebration of womanhood.

The United Nations began celebrating International Women’s Day in 1975, which had been proclaimed the International Women’s Year. In 1977, the United Nations General Assembly invited member states to proclaim March 8 as an official UN holiday for women’s rights and world peace. It has since been commemorated annually by the UN and much of the world, with each year’s observance centered on a particular theme or issue within women’s rights.

International Women’s Day sparked violence in Tehran, Iran on March 4, 2007, when police beat hundreds of men and women who were planning a rally. (A previous rally for the occasion was held in Tehran in 2003.) Police arrested dozens of women and some were released after several days of solitary confinement and interrogation. Shadi Sadr, Mahbubeh Abbasgholizadeh and several more community activists were released on March 19, 2007, ending a fifteen-day hunger strike.

By the twenty-first century, IWD has been criticized as heavily diluted and commercialized, particularly in the West, where it is sponsored by major corporations and used to promote general and vague notions of equality, rather than radical social reforms. In 2009, the British marketing firm Aurora Ventures set up a “International Women’s Day” website with corporate sponsorship. The website began to promote hashtags as themes for the day, which became used internationally. The day was commemorated by business breakfasts and social media communications that were deemed by some social critics as reminiscent of Mother’s Day greetings.