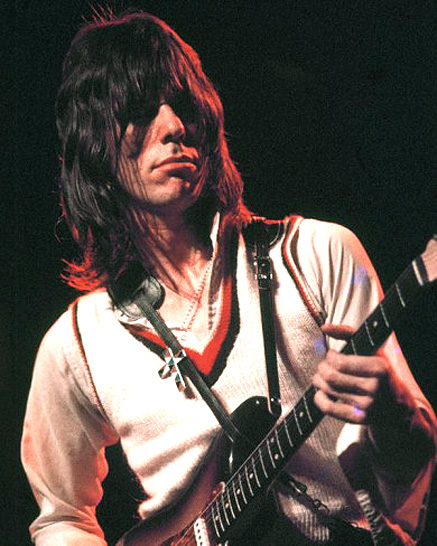 Jeff Beck - one of the world's greatest living guitarists, and then some.

Jeff Beck – one of the world’s greatest living guitarists, and then some.

I haven’t posted any Jeff Beck in a while and when I ran across this concert, recorded by The BBC for their In Concert series from July 1, 1972, I realized just what a tremendous talent Jeff Beck is and how long he’s been at it.

Forty-nine years ago, when you take a look at the date, and Jeff Beck is still recording and touring and shows no signs of slowing down at all.

In 1970, when Beck had regained his health, he set about forming a band with drummer Cozy Powell. Beck, Powell and producer Mickie Most flew to the United States and recorded several tracks at Motown’s famed Studio A in Hitsville U.S.A. with the Funk Brothers, Motown’s in-house band, but the results remained unreleased. By April 1971 Beck had completed the line-up of this new group with guitarist/vocalist Bobby Tench, keyboard player Max Middleton and bassist Clive Chaman. The new band performed as “the Jeff Beck Group” but had a substantially different sound from the first line-up.

Rough and Ready (October 1971), the first album they recorded, on which Beck wrote or co-wrote six of the album’s seven tracks (the exception being written by Middleton), included elements of soul, rhythm-and-blues and jazz, foreshadowing the direction Beck’s music would take later in the decade.

A second album Jeff Beck Group (July 1972) was recorded at TMI studios in Memphis, Tennessee with the same personnel. Beck employed Steve Cropper as producer and the album displayed a strong soul influence, five of the nine tracks being covers of songs by American artists. One, “I Got to Have a Song”, was the first of four Stevie Wonder compositions covered by Beck. Shortly after the release of the Jeff Beck Group album, the band was dissolved and Beck’s management put out the statement that: “The fusion of the musical styles of the various members has been successful within the terms of individual musicians, but they didn’t feel it had led to the creation of a new musical style with the strength they had originally sought.”

Beck then started collaborating with bassist Tim Bogert and drummer Carmine Appice, who became available following the demise of Cactus but continued touring as the Jeff Beck Group in August 1972, to fulfill contractual obligations with his promoter, with a line-up including Bogert, Appice, Max Middleton and vocalist Kim Milford. After six appearances Milford was replaced by Bobby Tench, who was flown in from the UK for the Arie Crown Theatre Chicago performance and the rest of the tour, which concluded at the Paramount North West Theatre, Seattle. After the tour Tench and Middleton left the band and the power trio Beck, Bogert & Appice appeared: Appice took on the role of vocalist with Bogert and Beck contributing occasionally.

They were included on the bill for Rock at The Oval in September 1972, still as “the Jeff Beck Group,” which marked the start of a tour schedule of UK, the Netherlands and Germany. Another U.S. tour began in October 1972, starting at the Hollywood Sportatorium Florida and concluding on 11 November 1972 at The Warehouse, New Orleans. In April 1973 the album Beck, Bogert & Appice was released (on Epic Records). While critics acknowledged the band’s instrumental prowess the album was not commercially well received except for its cover of Stevie Wonder’s hit “Superstition”.

This concert is from the Rough n’ Ready period, featuring Bob Tench on vocals and Max Middleton on keyboards. He recorded two albums with this group before getting involved in other projects and other lineups, but this concert from The Paris Theater showcases Beck’s remarkable skills and some of many reasons why he’s considered one of the greatest guitarists in the world.

By all means, crank this one up and enjoy.