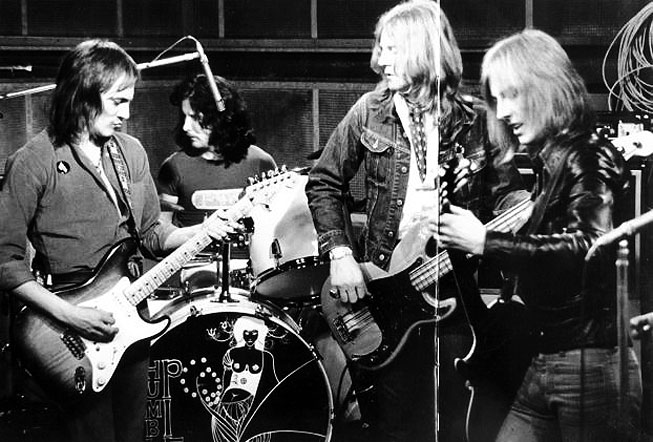 Some early 70s Headbangers this weekend, via Humble Pie, recorded in concert for the BBC as part of the John Peel Presents series from Sepetember 20, 1970.

It would be hard to say where Humble Pie were more huge – the U.S. or the UK. They were a staple in the diet of every vinyl collector and were played almost non-stop on most of the Underground FM stations at the time. They epitomized the growth of Hard Rock as a genre; the non-stop onslaught of guitars and stage swagger and they symbolized excess, almost as much as Led Zeppelin or The Rolling Stones.

Having formed in 1969 from elements of Small Faces (Steve Marriot), The Herd (Peter Frampton) Greg Ridley (Spooky Tooth), they achieved success almost out of the gate. By 1970 (when this concert was recorded), they had switched labels to A&M, got new management and their fortunes soared.

During 1970, with the Immediate label having finally collapsed Humble Pie signed to A&M Records, and Dee Anthony became their manager. Anthony was focused on the US market and discarded the acoustic set, instigating a more raucous sound with Marriott as the front man. The group’s first album for A&M, Humble Pie, was released later that year and alternated between progressive rock and hard rock. A single, “Big Black Dog”, was released to coincide with the album and failed to chart, however the band was becoming known for popular live rock shows in the US.

It was during this period that Peter Frampton acquired his famed “Phenix” guitar, the black 1954 Les Paul Custom which became his signature instrument and his favorite guitar for the next decade. Humble Pie was playing a run of shows at the Fillmore West in San Francisco in early December 1970, and during the first show Frampton was plagued by sound problems with his then-current guitar, a semi-acoustic Gibson 335, which was prone to unwanted feedback at higher volumes. After the show he was approached by fan and musician Mark Mariana, who loaned him a modified 1954 Gibson Les Paul, and by the end of the second show Frampton had become so enamored of the guitar that he offered to buy it on the spot, but Mariana refused payment. Frampton played it almost exclusively for the next ten years. It was featured on the cover of Frampton Comes Alive and was thought to have been destroyed in 1980 when a plane carrying Frampton’s stage equipment crashed in Venezuela during a South American tour, killing the crew, but with the guitar in fact surviving the accident with some minor damage. It was eventually returned to Frampton in 2011.

Frampton would leave a little over a year later and start that part of the legacy. But this 1970 concert captures the band during their halcyon days, with certainly no looking back.