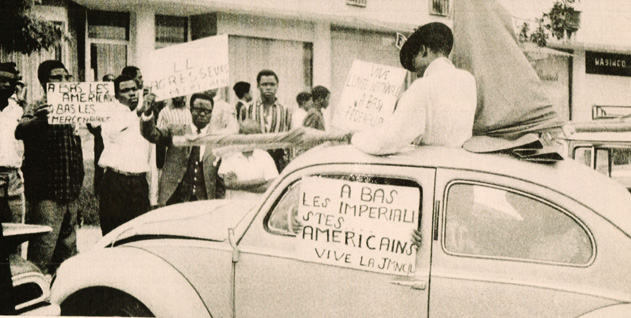 . . .something about our Foreign Policyand Africa.

The ongoing turmoil/growing pains/strife that marked the Africa Independence Movement in the 1960s continues, to a degree, to this day. But in 1964 it was all pretty fresh. There was The Congo, formerly Belgian Congo, which was undergoing a dramatic upheaval since achieving independence from Belgium in 1961. The entire region was a hotbed of mercenaries and UN Peacekeepers, and the U.S. was stuck precariously in the middle – mostly due to the Cold War atmosphere and the popularity contest being waged between Washington and Moscow for the hearts and minds of True Young Believers.

Needless to say, we weren’t scoring high points in the area of Foreign Policy in that area of the world. We were, after all, preoccupied with matters in Berlin and that simmering pot called Southeast Asia, getting ready to explode in the coming months.

But an assessment of the situation was discussed on this edition of Meet The Press, recorded March 26, 1961 and featuring Assistant Secretary of State for African Affairs, G. Mennen “Soapy” Williams (former Governor of Michigan) on the occasion of his return from a fact-finding mission to the region.

Not really an assuring interview, with reference to our position in the situation – and certainly not assuring in the area of where our Foreign Policy was heading in any sort of long-term outlook for these newly emerging nations. But perhaps it gives some clue as to where we have been historically as far as our interactions with Africa are concerned and where plain lack of understanding speak volumes.

Here is that complete Meet The Press edition from March 26, 1961 – where history gets an opportunity to speak, somewhat awkwardly,  for itself.