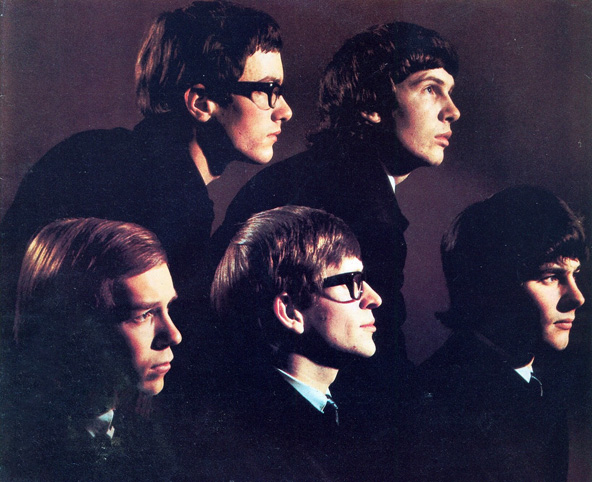 The Zombies in 1964 - Remarkably timeless.

The Zombies In Session – 1964 – Past Daily Soundbooth

The Zombies in 1964 – Remarkably timeless.

A perennial favorite tonight – The Zombies were one of the truly great bands that were part of the first British Invasion of the early 1960’s. Having gone through all the stylistic changes during that decade, finally breaking up with some members splintering off to become other success stories, the original Zombies recordings have retained a freshness not a lot of bands can claim, some fifty years after their first hearing.

Like many other British groups, the Zombies travelled to the United States to tour on the momentum of their hit single. Among their early US gigs were Murray the K’s Christmas shows at the Brooklyn Fox Theatre, where the band played seven performances a day. On 12 January 1965 the band made their first in-person appearance on US television on the first episode of NBC’s Hullabaloo and played “She’s Not There” and their new single “Tell Her No” to a screaming, hysterical audience full of teenage girls.

In the UK, the Zombies’ follow-up single to “She’s Not There” was written by Chris White. “Leave Me Be” was unsuccessful in the UK and as a result was not issued as an A-side in the US. It did appear as the B side of their second US single, “Tell Her No”. Penned by Rod Argent, “Tell Her No” became another big seller in 1965, peaking at No.6 on the Billboard Hot 100 in March. As the band’s third UK single, “Tell Her No” failed to make the Top 40, peaking at number 42. Subsequent recordings such as “She’s Coming Home”, “Whenever You’re Ready”, “Is This the Dream”, “Indication” and “Gotta Get a Hold of Myself” failed to achieve the success of the previous two singles (although the Zombies had continued success in Scandinavia and the Philippines, which led to a series of concerts in 1967). A song by the Zombies released only as a B-side (to “Whenever You’re Ready”) in both the US and UK in 1965, “I Love You” subsequently became a sizeable hit for the group People! in the United States in 1968.

The Zombies’ first UK album, Begin Here (1965) was an interesting mixture of original songs and rhythm and blues cover versions. Of the eight original tracks, Rod Argent supplied the album’s biggest hit, “She’s Not There”, and the songs “Woman”, “I Remember When I Loved Her”, plus “The Way I Feel Inside” which was the shortest track on the album at 1:28. It might have been shorter, had not their recording manager and producer Ken Jones added the sounds of footsteps and a coin dropping, which contributed to the feeling of alienation that the song projected. Bassist Chris White provided “I Can’t Make Up My Mind”, the quirky “I Don’t Want to Know”, plus the beauty “What More Can I Do” which, at 1:38, is the second-shortest cut on the album and contains a simple but distinctive drum riff. The final original was an instrumental written by Ken Jones, “Work ‘n’ Play”.

The Zombies continued recording original songs through 1965 and 1966, trying to achieve chart success. There were enough tracks to have filled a follow-up album, but due to the band’s lack of chart success, most of these tracks remained unissued at the time.

Tonight it’s two sessions the band cut for the BBC Program Saturday Club.  One session in October of 1964 and the other, a session cut in January of 1965.