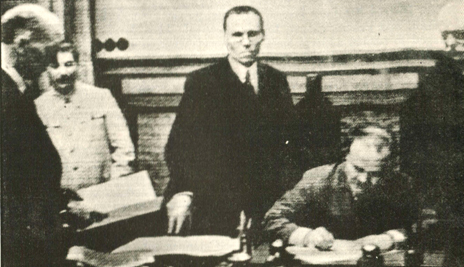 Molotov signs the German-Soviet Non-Aggression Pact. Entering into the most unholy of alliances.

Molotov signs the German-Soviet Non-Aggression Pact. Entering into the most unholy of alliances.

August 24, 1939 – News of this day – and depending on where you were, it was either August 24th or 25th, was completely taken over by the surprising move on the part of the Soviet Union to enter into a mutual non-aggression pact with Nazi Germany. This move effectively paved the way for a German invasion of Poland and the inevitable involvement of Britain, France and the rest of Europe, plunging the continent into World War 2 in only a matter of days. The shock waves of such an unholy alliance between two natural enemies gave one pause to speculate just how long this supposed friendship would last.

In the previous year, Hitler had annexed Austria and had taken the Sudetenland region of Czechoslovakia; in March 1939, his tanks rolled into the rest of Czechoslovakia. It appeared that he was determined to undo the international order set up by the Treaty of Versailles, the 1919 peace settlement that ended World War I (1914-18). (The treaty, which required Germany to make numerous concessions and reparations, was highly unpopular with Hitler and his Nazi Party.) It also seemed that Hitler was planning to strike next against its neighbor Poland. To block him, France and Britain pledged on March 31, 1939, to guarantee Poland’s security and independence. The British and French also stepped up diplomatic engagement with the Soviet Union, trying to draw it closer by trade and other agreements to make Hitler see he would also have to face Joseph Stalin if he invaded Poland. But Hitler already knew the Soviets would not stand by if he tried to occupy Poland–an act that would extend the border of Germany right up to the Soviet Union. He also knew France and the Soviets had concluded a defense alliance several years earlier–a treaty that gave Stalin an additional reason to fight Germany if it ventured into Poland and triggered France’s pledge.

Here is a shortwave news broadcast, direct from Paris and broadcast in English, detailing the signing and its speculated outcome for the rest of Europe on this August 24th-25th, 1939. The sound is a bit noisy at times, because Shortwave wasn’t all that reliable at the time. But it’s history and sometimes history just doesn’t sound all that good.