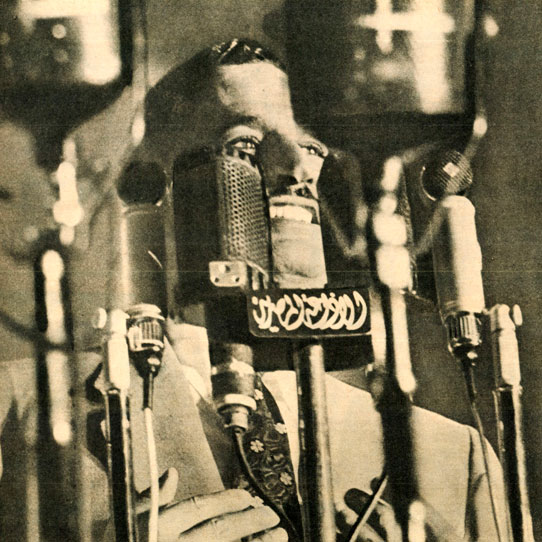 Egypt's Nassar - In 1957 A Lot of what was going on in the Middle East was about him.

Egypt’s Nassar – In 1957 A Lot of what was going on in the Middle East was about him.

Never one to shy away from controversy or taking a stand, Sen. Wayne Morse (D-Oregon) was interviewed on the NBC Radio Program Youth Wants To Know, regarding the Middle-East, which was undergoing a major upheaval with the crisis in the Suez Canal region of Egypt brewing, but also about our Foreign Policy in general.

His views on the Middle-East crisis:

Sen. Wayne Morse: “ Now I want you young people to remember a statistic out of this program. You know what this oil is worth and where it called upon to send American boys over to defend if necessary? Well, it’s admitted by The State Department that, based upon 1955 production and 1955 prices for oil, we’re talking about an oil reserve worth Ninety-eight billion, four hundred million dollars! And the Eisenhower Administration is already talking about economic grants to some of those oil countries. Now I don’t propose to vote a single dollar of grant to a single Arab country that has these great oil reserves. Let ‘em loan, let ‘em borrow the money from us, but not grant it. So you’ve got here the military question and the economic question bound up in one, and again I say, we shouldn’t be doing it alone, we ought to be doing it through the United Nations.”

Sen. Wayne Morse: “Well, the Eisenhower Administration has been the recipient of a press protection ever since it’s been in office. A great bulk of the reactionary Press of this country has of course been protecting the Eisenhower Administration from the very beginning. And the sad thing is, you’re not getting the facts about these matters in the press. What do you people know about American Foreign Policy? Really, very little. You know why? Because most of the information about American Foreign Policy is being kept from the American people. And that adds up to just one thing – that is a Police State technique. I don’t care whether it happens in the United States or in Germany or in Italy or in Russia, or where it happens. It’s a Police State technique. And what I’m pleading for in the Senate is that the facts about American Foreign Policy be given to the American people.”

No mincing of words, but even in 1957 things were askew.

Maybe it’s a comfort to know things haven’t changed. But most likely not.

Here is the complete interview from Youth Wants To Know, as broadcast in early 1957 over NBC Radio.