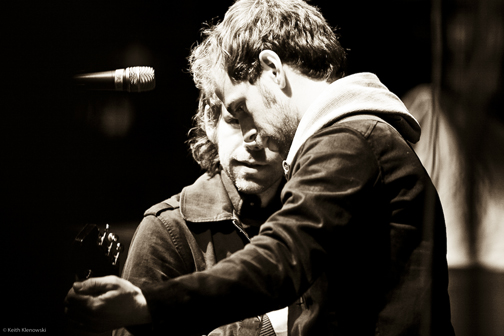 Over to Copenhagen this week for a special concert by The Copenhagen Philharmonic featuring Bryce and Aaron Dessner from the band The National, billed as Sixty Minutes Of The Dessners. Stepping out of their customary role as Rock guitarists, Bryce and Aaron Dessner, along with conductor Andrè de Ridder offer a unique and very satisfying concert of what is usually called “New Music“.

Featuring two of Bryce Dessner‘s own works , a Concerto for Double Guitar and Orchestra (St. Carolyn By The Sea), and Lachrimae,  featuring the Copenhagen Philharmonic Strings. Also on the program is  the venerable Steve Reich‘s Variations for Winds, Strings and Keyboards and Radiohead‘s Jonny Greenwood with his Popcorn Superhet Receiver.

The inclusion of Reich in the program is no coincidence, as both the Dessner’s and Jonny Greenwood are huge admirers of Reich’s work.

Good stuff, worth several listens. There’s hope for us all.