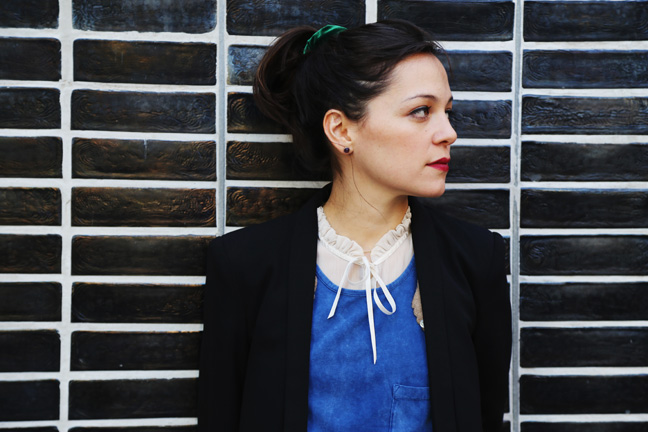 Natalia Lafourcade - Pop with a splash of Indie from Mexico.

Natalia Lafourcade – In Session At Conciertos de Radio 3 – Nights At The Roundtable: Rock Without Borders Edition

Natalia Lafourcade – Pop with a splash of Indie from Mexico.

Slight change of pace tonight. Pop with Indie leanings from Mexico City by way of Madrid in the form of Natalia Lafourcade. Recorded in session for the Conciertos de Radio 3 program on RNE Radio 3 in Madid, May 17, 2013.

I haven’t been focusing much on the musical happenings South of the Border of late. Lots going on in South America with a vigorous Indie/Experimental scene in Chile and Argentina. But Mexico is still uncharted territory for new bands. Not that there isn’t a lot going on; a few years ago, when MySpace was decent, there were a flood of bands springing up all over Tijuana and Jalisco, but I don’t know where they’ve gone or if a lot of them have broken up. Stay tuned – I’ll keep digging.

But for tonight it’s Natalia Lafourcade, who has been performing since she was very young. Now she’s hitting 29, she has a pretty extensive career under her belt  in the world of Mexican Pop Music as well as being a successful song writer.  She is huge in her native Mexico.

This set doesn’t show off her pop side, and for that reason it’s quite interesting and a lot of fun to listen to. She has a strikingly haunting voice and a very good band behind her. This might signal a change in direction for her. But not being all that familiar with her work, I don’t know for certain – I have nothing to compare it to.

The material on this set has a very folk/indie feel to it. And, as is often the case with these live sessions, much of the production that sometimes masks an artists flaws is gone and, stripped away from that safety net, Natalia Lafourcade has an amazing voice.

Whether we hear from her on this side of the border, aside from a very sizable audience in the Latino community, depends on how far you want to go to listen to good music – whether you understand the lyrics or not is kind of a moot point for me. There’s beauty in the notes and they have no language; just the language of the heart.

But if you’ve hung around this site for very long, you already know that.

. . .and Monday starts another week. More adventures to come.