Indie / Nights At The Roundtable / Past Daily / Rock Without Borders / Uncategorized 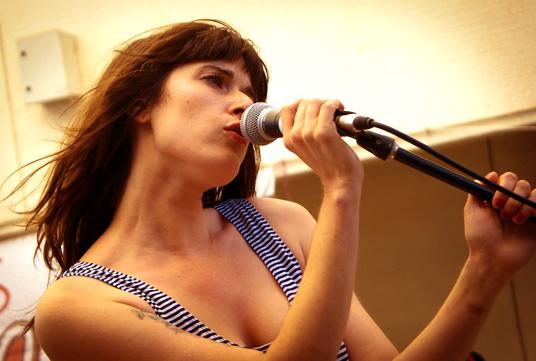 Tessie of Intimate Stranger - adding a touch of Croatia to the proceedings.

Intimate Stranger In Session – 2010 – Nights At The Roundtable: Rock Without Borders Edition

Tessie of Intimate Stranger – adding a touch of Croatia to the proceedings.

I have posted tracks by Intimate Stranger several times over the past few years, having been a fan since roughly 2008 when I first heard them via their MySpace page. Truly an international band, with members coming from Croatia, Chile and the UK. For a time they were based in both London and Santiago, but have recently been spending time in Austin Texas. Their careers have picked up greatly since I first posted about them. They were a hit at the 2011 SXSW Festival, have been frequently played on Independent/Alternative FM stations around the U.S., have been declared the band to watch by BBC 6 Music and released their 3rd studio album this past June.

Tonight I’m playing two session tracks they did for Radio Horizonte in Santiago in 2010 – Sand & Water and Nightime are two standout tracks from an ep they issued some time back. Their music is consistently good and memorable. I can’t say I am terribly surprised by their success and worldwide recognition – it was abundantly apparent from their very first demo. The fact they are from such far-flung countries as Chile and Croatia make it all that much more convincing that this is a band with something to say and will most likely be around for a while saying it.

It’s nice when that happens.

In all due likelihood they will be touring the U.S. again in 2013. It’s a foregone conclusion that you should try and check them out.