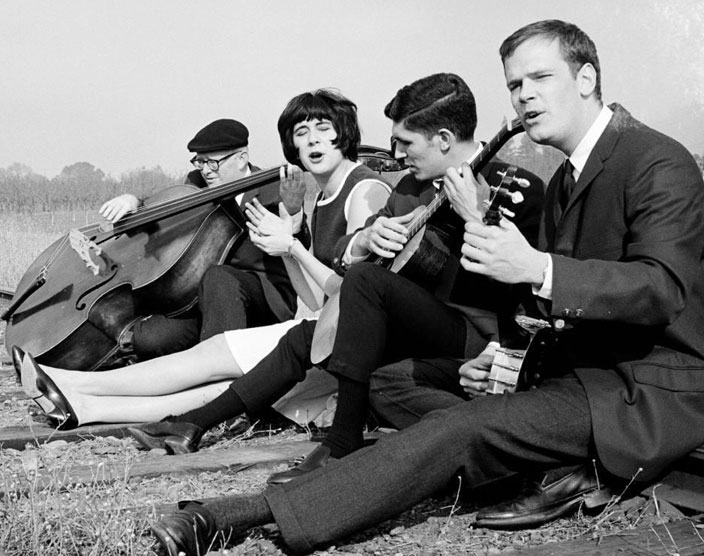 The Whiskeyhill Singers - Folk Music at the cusp of Dylan.

The Whiskeyhill Singers – Folk Music at the cusp of Dylan.

Click on the link here for Audio Player: [audio https://oildale.s3.amazonaws.com/wp-content/uploads/2013/05/22153837/whiskey-hill-singers-complete.mp3]

I originally ran this on my previous site a few years ago, but it seems as apropos now, maybe even more so, than it did then.

There seems to be a resurgence in interest towards Folk Music of late. Perhaps not the hardcore roots Folk of the Pete Seegers and Theodore Bikels of that genre, but a new take on the individual style of the Phil Ochs, Fred Neil, Judy Collins’ of that genre.

Dave Guard‘s Whiskeyhill Singers fell somewhere in the middle of that. Guard, a recent veteran of The Kingston Trio, left largely because the KIngston’s were drifting away from Folk and venturing into more pop territory. Guard wanted to preserve the integrity of the Folk message and joined forces with Judy Henske and Cyrus Faryar (or Farrar as the tape boxes sometimes indicate), and taking along bassist/musicologist David “Buck” Wheat, they sought to strike a balance in what was becoming a rapidly changing Folk scene.

Ironically, the group didn’t last long – splintering off in different directions. In Guard’s case, splintering off to another country. Henske went on to pursue a solo career. Faryar went on to found the groundbreaking Modern Folk Quartet, which probably has had more influence on the likes of Mumford and Sons and the burgeoning New Folk scene of 2013. But in 1962, this was around the period sometimes referred to as “The Dawn of Dylan” – where the true upheaval in the Folk idiom was just around the corner, and traditional Folk Groups like The Whiskeyhill Singers were destined to fade from the scene.

This concert from the Hollywood Bowl from around June of 1962, one of the rare ones the band gave, comes just prior to the breakup of the group. They had recorded and released one album, and had recorded a second album prepared but was never released.

On this date they shared the bill with opening act Dave Brubeck and headliner Keely Smith – pretty diverse, but completely normal for the time.

Another slice of musical history, and a rare one at that.

Update: As was pointed out by one of our eagle-eared readers, Judy Henske actually left the group by this time to pursue that solo career. She was replaced by Liz Seneff, who went on to a solo career after Whiskeyhill’s demise and later was a member of The Split Level. (h/t: Peter).