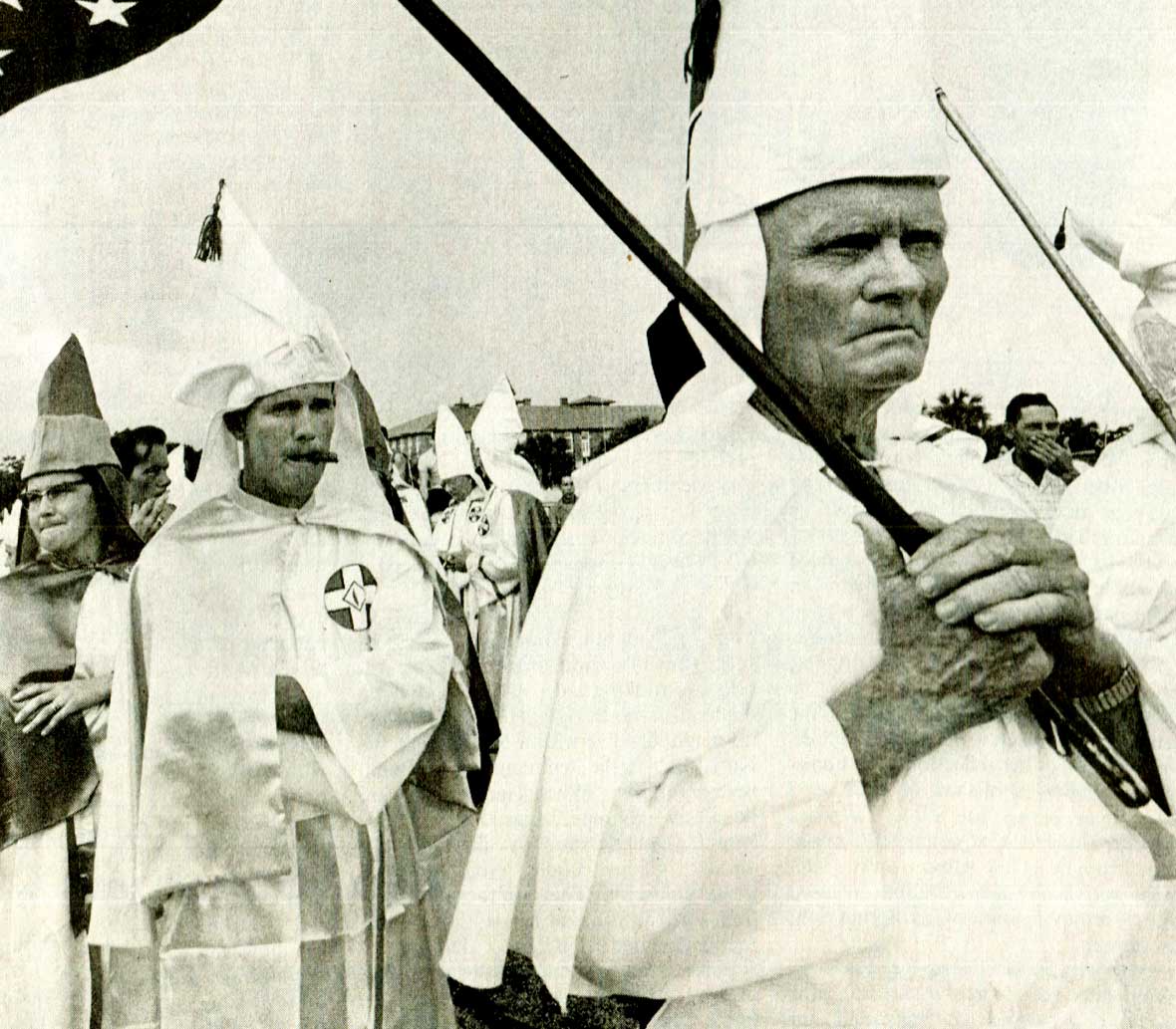 KKK Rally at the GOP Convention in San Francisco - 1964 - according to them, Barry Goldwater was on their wavelength.

KKK Rally at the GOP Convention in San Francisco – 1964 – according to them, Barry Goldwater was on their wavelength.

The KKK, a extreme-radical group which pops up from time to time – one which has popped up recently in connection with the candidacy of Donald Trump. According to them, Trump speaks their language and he is on their wavelength. Trump denies the support. But history has shown the KKK have been, maybe not influential, certainly a presence within the American political framework of the late 19th and early 20th century. There was a time in our history, not that long ago, that the KKK was a political movement; one whose members were periodically seen marching down Constitution Avenue in Washington D.C. and supporting candidates for public office. Times changed, attitudes changed, the KKK and other groups like it, went slightly off the radar.

But in recent years, groups like the KKK have made themselves vocal again; emboldened by what has been perceived as a backlash to progress; capitalizing on the downtrodden, the fearful and the angry, they tout candidates like Donald Trump as a “man who speaks his mind” and “a man who gets things done”. And as much as there is tacit disapproval of this form of support, it harkens back to other points in our history where such support, though publicly rebuked, was privately encouraged.

A similar situation came about in 1964, in what was one of the most hotly contested and contentious Presidential races up to that point in history . News that the KKK and the staunchly radical right-wing group The John Birch Society threw their full support behind Barry Goldwater, the Republican candidate for President. The move had many, particularly those in the Republican Party, who were wary of supporting Goldwater in the first place, now convinced the Goldwater forces had hi-jacked the Party and were taking in a direction few imagined would happen.

To the KKK and the Birchers, Goldwater was “a man who spoke his mind” and “got things done” and was hawkish when it came to war with the Communists. It was Goldwater who had advocated the use of Nuclear weapons, should the need call for it. And although, during this interview with vice-Presidential running mate William Miller, he denies he “actually said it”, the inference was enough to cause many to believe Goldwater was on the wrong side of history, and that the GOP had clearly lost their way.

But to get an idea of the radical support behind Barry Goldwater at the time, this interview with Miller outlines much of where the candidates stood on the issues of the day. It comes relatively fresh after the GOP Convention in San Francisco days earlier, where Goldwater and Miller were nominated to be the standard bearers in the Presidential election.

To get some clarity on where things stand now – even though we’re some 52 years after that election and much has changed over the years, there are still enough elements and sentiments freshly rekindled during this election season to give one pause and contemplate how far we haven’t actually progressed.

Have a listen and see for yourself. Here is that episode of ABC News’ Issues and Answers with Howard K. Smith and his guest William Miller, vice-Presidential candidate for the GOP in 1964.