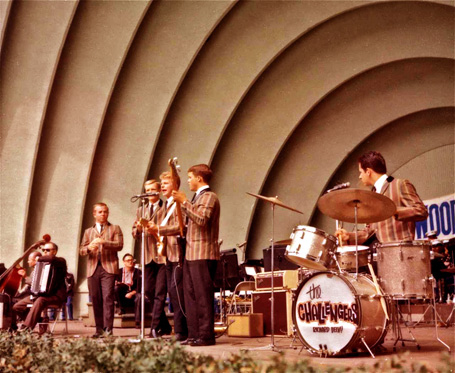 The Challengers - Y-Day At The Bowl - 1963. A pivotal moment in retrospect.

Y-Day At The Bowl – 1963. The Beach Boys, Surfaris, The Routers, The Challengers – Past Daily Pop Chronicles.

The Challengers – Y-Day At The Bowl – 1963. A pivotal moment in retrospect.

A few years ago I ran a portion of this concert, via my now-defunct Newstalgia site. It featured headliners The Beach Boys at the annual Y-Day At The Bowl event for the YMCA on October 19, 1963. It was a star-studded event and I promised to run the rest of that concert at some point. With this new site, Past Daily, it seemed like a good idea to make good on that promise and finally run the rest of the concert.

When you consider what was just around the corner in our society, this was a much more significant event than first realized. Less than a month later, President Kennedy would be assassinated. Three months later, The Beatles would arrive in the U.S., and what would be the start of The British Invasion and the beginnings of a dramatic upheaval in Youth Culture in music, social behavior and even fashion.

Hosted by Art Linkletter, who at the time was an acknowledged spokesman for Pop Culture in the mainstream, had a daily radio as well as TV show and considered a link between generations – the guy who knew “what the kids wanted”.

Listening to this concert, which runs almost two hours, is fascinating and somewhat frustrating. Fascinating in the sense that, this is what popular concerts were like at the time – a lot of bands and artists, usually singing one or two numbers, quickly set up and changed in order to keep the pace running high. Frustrating in the sense that, this was long before the days of Sound Reinforcement and Stage monitors. The sound you hear is the sound the audience heard the day of the concert. The bands couldn’t hear each other sing, let alone play, and often the notes ran a little flat, or a lot flat (in the case of Jan & Dean). It was just the nature of technology at the time.

But this is a historic concert and history is sometimes a lot different than imagined. This is also history in the sense that this is one of the few surviving documents of some artists performing live before an audience. As far as I know, no other copy of this complete concert exists – this is the master, and even though there is evidence it was broadcast, it’s not likely the entire concert made it over the airwaves. So you get to hear it here first.

Because the concert is a long one, I’ve broken it up between two players.

And of course, Art Linkletter, Muzzy Marcelino and his band and the U.S. Marine Corps Marching Band.