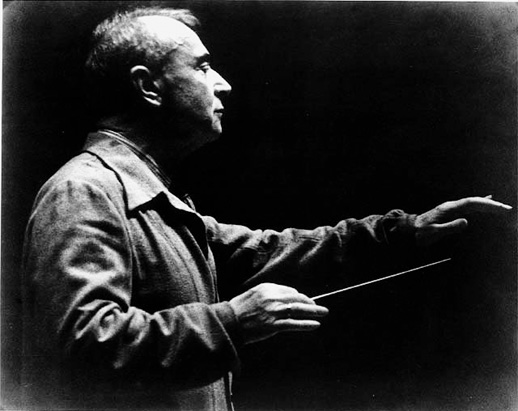 Serge Koussevitsky - One of the Grand Elder Statesmen of the Podium.

Serge Koussevitsky – One of the Grand Elder Statesmen of the Podium.

Something special this weekend – a Hollywood Bowl broadcast, featuring the Los Angeles Philiharmonic, guest conducted by Serge Koussevitsky and featuring the 30-year old violin-wunderkind Issac Stern in an all-Tchaikovsky Concert.

In 1940, Isaac Stern began performing with Russian-born pianist Alexander Zakin, collaborating until 1977. Within musical circles, Stern became renowned both for his recordings and for championing certain younger players. Among his discoveries were cellists Yo-Yo Ma and Jian Wang, and violinists Itzhak Perlman and Pinchas Zukerman.

Among Stern’s many recordings are concertos by Brahms, Bach, Beethoven, Mendelssohn, Sibelius, Tchaikovsky, and Vivaldi and modern works by Barber, Bartók, Stravinsky, Bernstein, Rochberg, and Dutilleux. The Dutilleux concerto, entitled L’arbre des songes [“The Tree of Dreams”] was a 1985 commission by Stern himself. He also dubbed actors’ violin-playing in several films, such as Fiddler on the Roof.

Stern served as musical advisor for the 1946 film, Humoresque, about a rising violin star and his patron, played respectively by John Garfield and Joan Crawford. He was also the featured violin soloist on the soundtrack for the 1971 film of Fiddler on the Roof. In 1999, he appeared in the film Music of the Heart, along with Itzhak Perlman and several other famed violinists, with a youth orchestra led by Meryl Streep (the film was based on the true story of a gifted violin teacher in Harlem who eventually took her musicians to play a concert in Carnegie Hall).

In his autobiography, co-authored with Chaim Potok, My First 79 Years, Stern cited Nathan Milstein and Arthur Grumiaux as major influences on his style of playing.

From the broadcast of September 9, 1950. Original discs are a little noisy, but it’s livable. A rare concert that hasn’t seen the light of reissue anywhere.

Enjoy – and tell your friends. They may not hear this anyplace else.