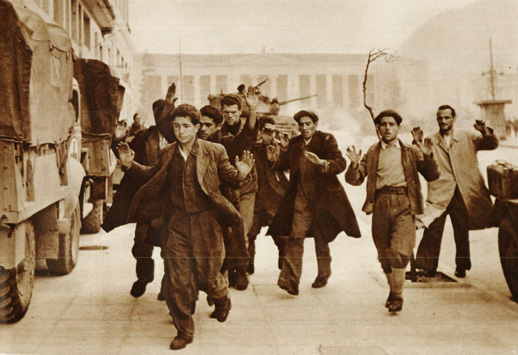 On top of everything else - riots.

On top of everything else – riots.

With all the upbeat reports coming in on this December 5th in 1944, the worrisome part had to do with the goings on in Athens.

Otherwise, reports of Gen. Patton’s 3rd Army were driving deep into the Saar, encountering heavy opposition in the process. But gains were being made.

Gains were being made too, by the British 2nd Army on their continuing drive in Holland.

The deadlock going on in Italy was showing signs of breaking up, with reports of Allied advances taking place.

The War in the Pacific was progressing along, with upbeat reports from the Philippines.

But the situation in Greece was another matter. Rioting continued in Athens with civil war between right and left factions on the brink. Britain was now in the position of being in the middle. With everything else going on.

And back on Capitol Hill. The White House disclosed a re-shuffling (i.e shakeup) in the State Department with, among other things, the appointment of Librarian of Congress and Poet Archibald MacLeish to the position of Assistant Secretary of State.