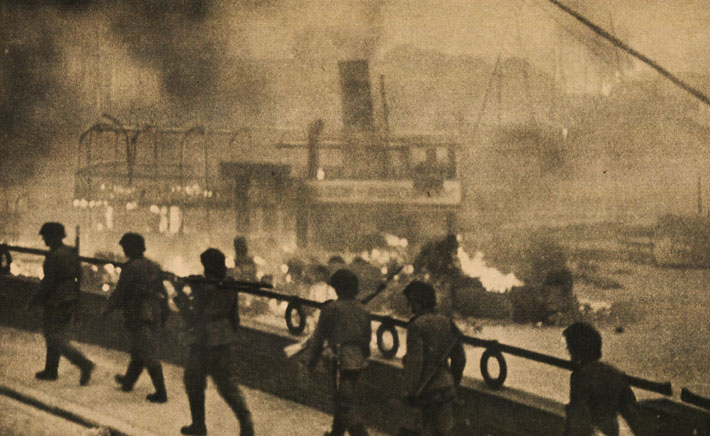 And with The Netherlands, another domino fell.

And with The Netherlands, another domino fell.

With the War in Europe a little less than 8 months old, the German Army were making steady advances westward. The latest country to fall under German occupation was The Netherlands, and on this May 15th in 1940, Queen Wilhelmina delivered an address from her relocated government, set up in London after having successfully evacuated two days earlier.

The Battle of the Netherlands was a military campaign part of Case Yellow, the German invasion of the Low Countries (Belgium, Luxembourg, and the Netherlands) and France during World War II. The battle lasted from 10 May 1940 until the surrender of the main Dutch forces on 14 May. Dutch troops in the province of Zealand continued to resist the Wehrmacht until 17 May when Germany completed its occupation of the whole country.

The Battle of the Netherlands saw some of the earliest mass paratroop drops, to occupy tactical points and assist the advance of ground troops. The German Luftwaffe used paratroopers in the capture of several airfields in the vicinity of Rotterdam and The Hague, helping to quickly overrun the country and immobilise Dutch forces.

After the devastating bombing of Rotterdam by the Luftwaffe on 14 May, the Germans threatened to bomb other Dutch cities if the Dutch forces refused to surrender. The General Staff knew it could not stop the bombers and ordered the Dutch Army to cease hostilities.

The news was looking grim. After her address, CBS News Correspondent Elmer Davis gave an assessment of events taking place elsewhere. The German Army was advancing in France, having broken through a weak link in the formerly impregnable Maginot Line. The fighting around Norway was all but over. The Germans were advancing on Belgium. It was wondered just how long France would be able to withstand the Blitzkrieg before finally capitulating. And all the time, the constant fear of an impending invasion of Britain.