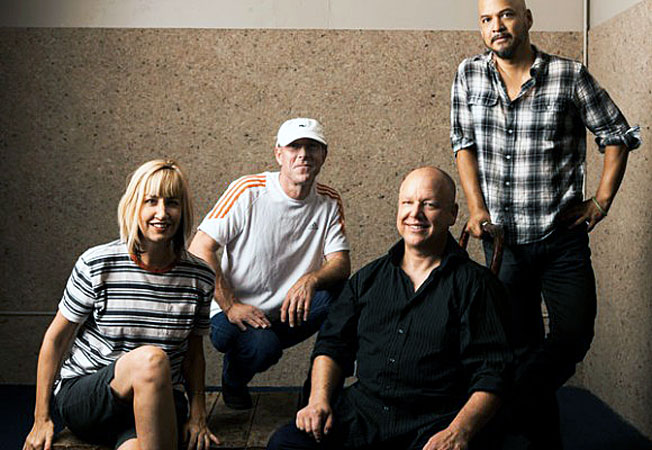 Pixies with Kim Shattuck - exchanging one Kim for another.

Pixies In Concert At The Olympia – 2013 – Nights At The Roundtable: Special As-It-Happens Edition

Pixies with Kim Shattuck – exchanging one Kim for another.

Click on the link here for Audio Player- The Pixies in concert at l’Olympia, Paris – broadcast live by Le Mouv’ – September 30, 2013

As promised last night, here is a special edition of the Roundtable, featuring a live-as-it-happened concert, kicking off the Continental leg of their European tour by the Pixies, direct from the stage at l’Olympia in Paris just last night (September 30) and broadcast live by RFI‘s Le Mouv and several other outlets throughout Europe.

New tour, new album (Bagboy) and new member, Kim Shattuck on bass and backup vocals, who replaced long time member Kim Deal who left earlier this year. Shattuck comes by way of L.A. band The Muffs and before that, The Pandoras.

A lot of anticipation, and judging from the audience a lot of appreciation.

The tour continues for the rest of the year and takes the band from London to Prague and just about everywhere in between, with all but five dates sold out (but tickets for those going fast, so if you’re in Vienna or Toulouse, get to the box office). A good end to a big year.

And if you missed them, you can catch up on the latest and enjoy what everybody else got to hear in Paris last night. And get a copy of  Bagboy.