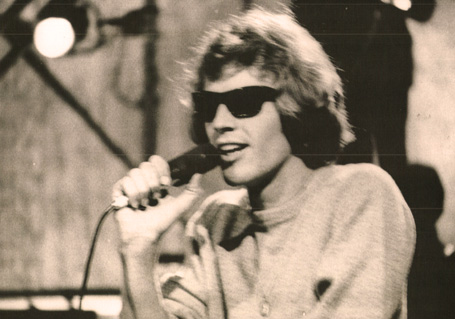 The Walker Brothers - Scott Walker - an enigma, even then.

The Walker Brothers Scott Walker – an enigma, even then.

Something unusual for The Soundbooth tonight. Demo sessions recorded in Los Angeles in 1964 by the soon-to-become Walker Bros. One of those demo tracks did make it release (I Only Came To Dance With You), but the rest, it’s a bit fuzzy. These demo tapes wound up at Vee-Jay Records, who had been slowly changing their focus from strictly Blues and R&B to a more Pop-oriented label, having had the temporary distinction of releasing the first Beatles album in the U.S. and some of the first Beatles singles on the subsidiary Tollie label.

So it would seem a natural that Vee-Jay would be interested and the demo tapes were being offered on a license. Whatever happened, The Walker Brothers had a different set of fortunes awaiting them and these tapes were pretty much forgotten.

Tonight it’s two of those demo tracks, Sweets For My Sweet and the standard, Zing, Went The Strings Of My Heart, done in that inimitable Scott Walker fashion.

The Walker Brothers Trio was formed in Los Angeles in 1964 by John Walker (lead vocals, guitar), Scott Engel (bass, harmony vocals), and drummer Al “Tiny” Schneider. Before then, John Walker—who had already been using that name professionally for several years—had performed and recorded several unsuccessful singles with his sister as a duo, John and Judy, and Engel had been bass player with instrumental band The Routers. Walker and Engel, with two other musicians, had also toured the Midwest in 1963 as “The Surfaris,” although the group included none of the musicians who played on the Surfaris’ records. Dropping the word “Trio,” Walker and Engel were signed by Mercury Records, recorded a single, “Pretty Girls Everywhere,” and became a leading attraction at Gazzari’s Club in Hollywood. They also appeared on the Shindig! TV show, developed by Jack Good, and then on a weekly TV show, Ninth Street A Go Go.

I was looking around to see if these demos had been issued in any form. At the moment, they don’t appear to be.

So something unusual, and pretty rare tonight from a group that went on to achieve worldwide popularity and to a founding member who has become an icon over the years.

It all had to start someplace.