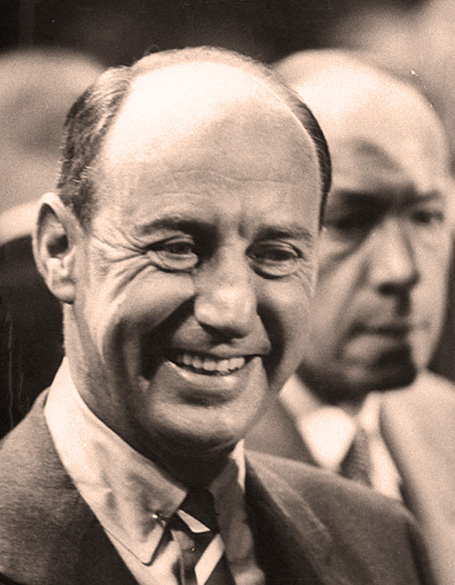 Adlai Stevenson - one of the more eloquent voices, stilled this week in 1965.

Adlai Stevenson – one of the more eloquent voices, stilled this week in 1965.

The news for this week, ending on July 18, 1965 was rather sudden and sad. Former Governor, Presidential Candidate and United Nations Representative Adlai Stevenson collapsed and died of a massive heart attack on a London street, after speaking at a UN Conference there. The shock quickly spread throughout the world that one of the most eloquent voices of the 20th Century was gone. Tributes poured in a almost instantly, and by the end of the week Stevenson had been laid to rest and eulogized countless times. In this broadcast are highlights of some of Stevenson’s most famous speeches.

Even though the news of the passing of Stevenson was predominant, there was other news this week.

NASA was getting closer to an exploration of Mars. The Vietnam War was escalating. And The John Birch Society premiered a 3 hour epic film on the group and its leader Robert Welch.

A week of contrasts, to be sure. And a lot of other news was covered in this edition of The World This Week from CBS Radio.