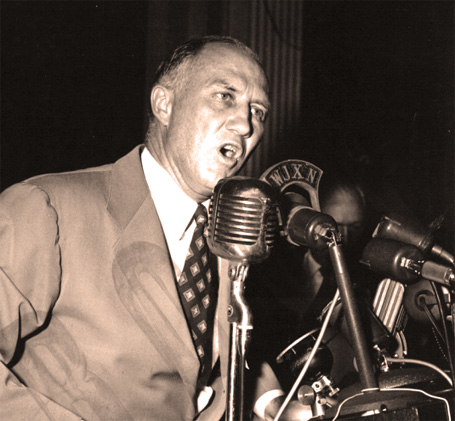 The 1948 Presidential race was hard fought and hotly contested. Within the ranks of the Democratic Party there was a faction, primarily representing the South, who objected strongly to President Truman’s strong Civil Rights stand. So resentful of the President’s campaign to end racial discrimination in the Armed Forces, end lynching, end racial segregation and end voting discrimination, that the Southern Bloc broke away and formed The States Rights Party in reaction to Truman’s renomination at the Philadelphia Convention.

Here, during the seconding votes and speeches given by delegates, is the address by Strom Thurmond, voicing his opposition to the Truman Civil Rights plank. It is from the night of July 14, 1948 and features Thurmond and several other delegates who would figure prominently in the defection later on.

It’s a short address, and the audience is noticeably mixed in its reaction to Thurmond. But it’s a glimpse of just how chaotic the 1948 Democratic Convention was in 1948.