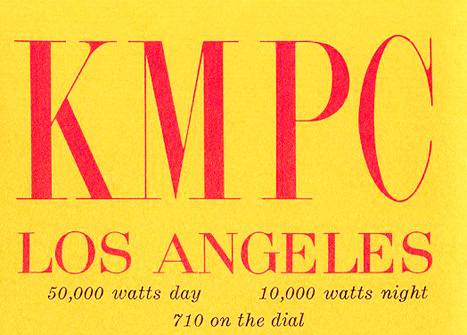 KMPC in 1968 - Appealing to the post-30 Adult and the swinging Bachelor.

KMPC in 1968 – Appealing to the post-30 Adult and the swinging Bachelor.

As strange as this may seem, this was the other radio format that competed with Top-40 in the 1960’s. It was more middle-of-the-road than straight Pop. It was, for all intents and purposes, Mainstream music. This was what a large percentage of Los Angeles was listening to when AM radio was still the predominant popular media outlet.

This was also during the days of Personality Radio, where the disc-jockey was the main attraction. This broadcast – a thirty-minute excerpt from June 10, 1968, features one of the most popular Disc-Jockey‘s of the day, Dick Whittinghill. He had been with KMPC from the mid-1950’s until his retirement in 1979 and was something of an institution in Los Angeles radio.

Radio then, as now, was saturated with commercials – and coupled with the personality of Whittinghill, the music took a very distant third place. But there is an interesting mix of singles and some indication that most of what you heard on the radio at this time was not cutting edge. Much of the music has been forgotten about, or seldom heard these days. That might be a blessing as it was pretty bland, even then. But a lot of it has achieved its own cult following in recent years. Which just goes to show you, you can never be sure about anything when it comes to music.

For the next half-hour, pretend it’s 1968 and you got this station by accident.