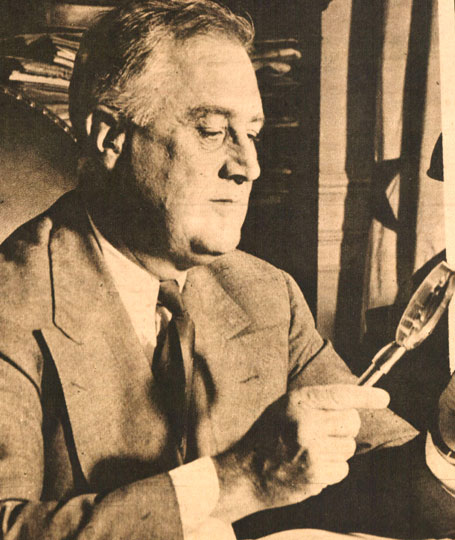 As a reminder of the ongoing and seemingly endless battle over the Budget, here is an address given by President Roosevelt to the American Retailers Federation in Washington D.C. on May 22, 1939. It appears the issues of fiscal policy were the same then as they are now.

Pres. Roosevelt: “I wonder if you have any conception of the number of businessmen and bankers and economists whom I talk with briefly or at length in any given month of the year. I wonder if you have any conception of the variety of suggestions and panaceas that they offer me. I wonder if you know the very large percentage of them who honestly, and in good faith, and very naturally, think of national problems solely in terms of their own business. I wonder if you will be surprised if I tell you that most of them leave my office saying to me—”Why, Mr. President, I did not know about that. You have given me a new perspective. You have told me new things that are happening, new causes, new effects. I never thought of the problem in that way before.”

I sit in my office with a businessman who thinks the surest way to produce customers is to balance the Federal budget at once. I say to him, “How?”

Then I take from my desk drawer a fat book and it is apparent at once from his expression that he has never seen or read the budget of the Government of the United States.

I point out the one and a half billion dollars for the Army and Navy. He pounds the desk and says in patriotic fervor, “Don’t cut that item—not in these days.”

I show him the item of a billion dollars for interest on the public debt. He owns some Government bonds, and he rejects any cut in his interest.

I show him the billion dollar item for war and civil service pensions. He says, “No, we couldn’t get enough popular support to cut this.”

I mention the billion dollars for running the permanent functions of the regular Government departments, and I tell him that. they cost less today than under my predecessor. He readily agrees that the postmen and the G-men and the Forest Service and the customs people cannot be curtailed. The only people he would sever from the payrolls are the tax collectors. (Laughter)

That gets us down to a few other big items— totaling over four billion dollars to take care of four major things—payments ;for the benefit of agriculture, Federal public works (including P.W.A., reclamation and flood control), work relief for the unemployed (including C.C.C.), and assistance for our old people.

My visitor agrees with me that we are going through a transitional period seeking the best way to maintain decent prices for the farm population of America, trying to make them better customers of businessmen, and that even if we have not yet found the permanent solution we have got away permanently from 5 cent cotton and 10-cent corn and 30-cent wheat.

I come to the public works item. He suggests that that can be cut 50 per cent. I happen to know that his community is working tooth and nail to get a grant for a much needed new high school, and that his county suffered severe property losses from recent floods. I suggest that we start public works economy right there and not give the grants and that we defer building the schoolhouses or the levee or the flood control dam for twenty or thirty years.

In every case I find what I suspected. His local Chamber of Commerce, his local newspapers are “yelling their heads off” to have those projects built with Federal assistance. And I say to him: “Consistency, thy name is geography. You believe with the United States Chamber of Commerce that Federal spending on public works should cease- except in your own home town.” (Laughter).

Some things will just never change.

Pretend it was given a week ago and that our issues with fiscal policy are roughly the same.