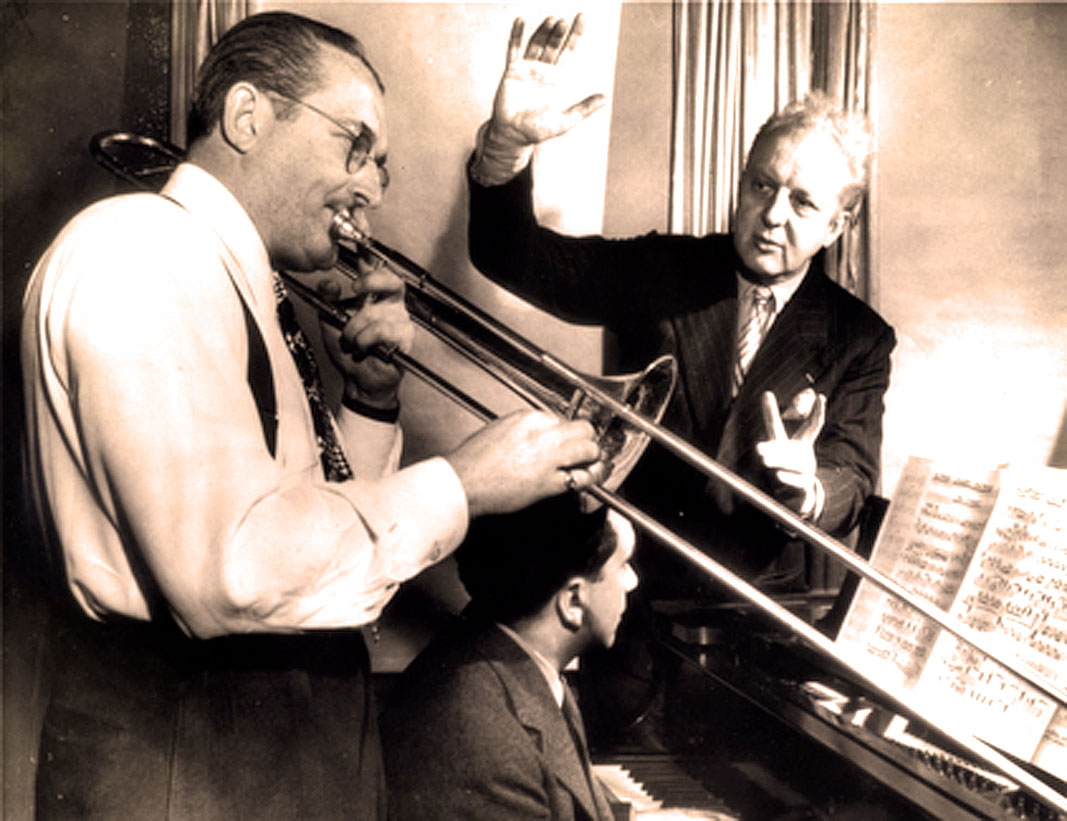 Stoki and the dedicatee (but not soloist on this performance) Tommy Dorsey.

Stoki and the dedicatee (but not soloist on this performance) Tommy Dorsey.

Something obscure and long-thought lost this weekend. The Trombone Concerto by Nathaniel Shilkret with Hoyt Bohannon, trombone solo and The Los Angeles Philharmonic guest conducted by Leopold Stokowski, performing at the Hollywood Bowl on July 28, 1946.

Not the world premier, but the West Coast premier. Not the original dedicatee (Tommy Dorsey) but Hoyt Bohannon. Nathaniel Shilkret was very well known as a Pop Music composer, arranger and Band leader from the 1920s onward. And collaborated with some of the greatest names in Pop and early Jazz music of the time. His Trombone Concerto was initially well received, but sadly wasn’t destined to immortality.

The Concerto, after getting a number of fits and starts and lousy luck, languished for almost forty years until is was re-discovered and recorded for the Swedish label BIS in 2004 in what became the World Premier recording.

So this performance is quite rare and never available in its original Orchestral form. With the extra added bonus of having the voice of Leopold Stokowski announcing the work.

History in the making. Enjoy.

Since history is what Past Daily is all about, and this weekend’s post of the Nathaniel Shilkret Trombone Concerto is only one of the thousands of rarities in the Gordon Skene Sound Collection, it’s only natural that we ask you to support the continuing efforts of preservation and digitizing these rarities and offer them to you to listen to, study from and enjoy. All it takes is a small donation on your part – best of all, it’s Tax Deductible, so you can write us off at Tax Time. Chipping in a few bucks – or twenty – or a hundred. Whatever you’re comfortable with, but knowing it’s going for the cause of history and the preservation and digitization of works such as these. Works that might otherwise be lost or destroyed as so many have. So, if you could click on the headline just below our Mascot (the dog playing the Piano and Singing), and make your pledge for $20, $50, $100 . . .whatever amount you can, that will be awesome and we will be eternally grateful. Do it today.