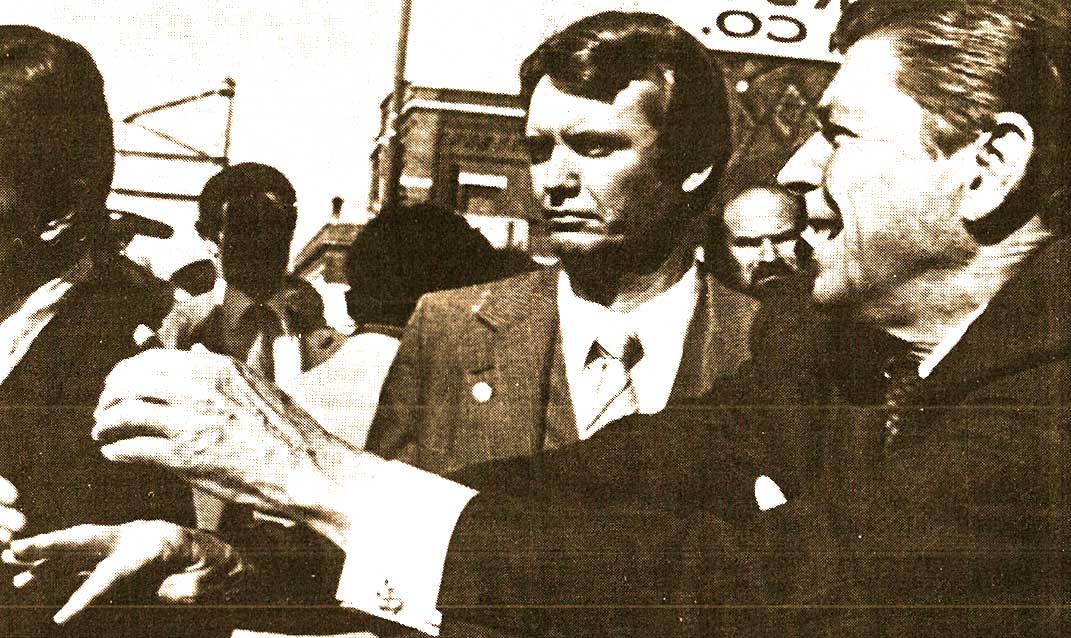 With 4 weeks to go, the 1980 Presidential campaign was in the home stretch. On this October 7,1980, the polls were all over the place and the candidates were in high gear; pressing the flesh, promising the moon.

And the election rhetoric started to get harsh. President Carter, insisting there was a difference, but with Ronald Reagan refusing to debate there was a fear coming from the White House that time was growing too short to demonstrate that difference and so he went on the offensive, blasting the Reagan platform as divisive and ultimately bad for the country. The Reagan camp responded by appealing for the Ethnic vote; reaching out to Italian-American voters and Polish-American voters, a block of voters normally Democratic, but leaning in Reagan’s direction, according to the polls. Reagan was taking no chances. The Polls in California were not encouraging for Carter, with a 12 point lead in that state; 40-28%, with John Andersen trailing behind with 11%. However, one-fifth of the California electorate remained undecided. Election ’80 was on a crash-course to the history books.

The Iran-Iraq War was continuing, with Iraqi forces making big advances inside Iran and taking control of the main Iranian oil port of Khorramshahr. Meanwhile, Jordan’s King Hussein declared open and full support of Iraq, the first Arab chief of State to take that step. Reports also went on to say Jordan had positioned some 40,000 troops along its border with Iraq in support against Iran.

Back home, President Carter received Nigerian President Shehu Shagari at the White House. Shagari was a vocal opponent of South African Apartheid and his meetings with Carter were viewed as a significant step in the U.S. position towards South Africa as well as a good political move, allowing Mr. Carter to be identified with the aims of a respected Black African leader, whose opposition to apartheid and racism were well known by many Blacks in the U.S.

In France, new attacks against Jews were reported as thousands massed in Paris to protest the resurgence of anti-semitism in the past few weeks. Police said a molotov cocktail was thrown at a Jewish-owned grocery store in Grenoble in Northern France, as well as incidents of vandalism to Jewish homes and stores in several smaller cities.

A group of white students were boycotting South Boston high schools for a second day, demanding the schoo resume using detectors to be sure other students were not carrying knives. Several students were hurt the week before when a fight broke out between Blacks and Whites.

All that, and a lot more happening on this October 7th in 1980 as reported on The CBS World News Roundup and CBS Hourly News.