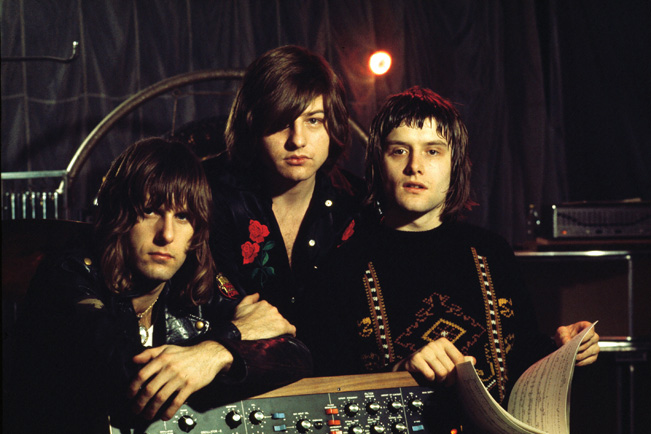 ELP - likened in the Press to the Second Coming.

Emerson, Lake And Palmer – Live At Beat Club 1970 – Nights At The Roundtable

ELP – likened in the Press to the Second Coming.

When you consider that Emerson, Lake and Palmer were the first Progressive Supergroup to emerge on the scene in 1970 (Keith Emerson from the then-recently broken up Nice, Carl Palmer from The Crazy World Of Arthur Brown and later, Atomic Rooster and Greg Lake from King Crimson), ushering in the age of Prog-Rock and influencing a veritable mass of musicians, you can understand how hearing the music from tonights post would seem new and interesting and loaded with possibilities at the time.

That they became a huge arena band said a lot to encourage the audience to keep an open mind. And in doing so, paved the way for a lot of bands to follow in their footsteps. Although I doubt that, had there not been an ELP, a Genesis might not have existed – they would. It just would have taken them longer to get their message across. It was just that this new complexity and mashing up of Classical, Jazz and Rock held a lot of appeal for people who were looking for something more in their listening experience. They did what they needed to do and they did it remarkably well.

Tonight it’s an early session via the Beat Club program from RBB in Germany. A live session from 1970, it catches the band when the songs were new and the energy was high – and this was the period that got everybody’s attention.  This was the period the Press almost universally proclaimed them the Second Coming.

If you can, try and forget your impression of the band based on their later material. By the time Brain Salad Surgery came around the band was well established, and in some ways, complacent (as a lot of bands get, you will admit) and they played what the audience expected, and well . . . .they were a little over the top.

In 1970 no one knew what to expect – they were new and they were heading for uncharted territory.

Fun when that happens. Play loud.