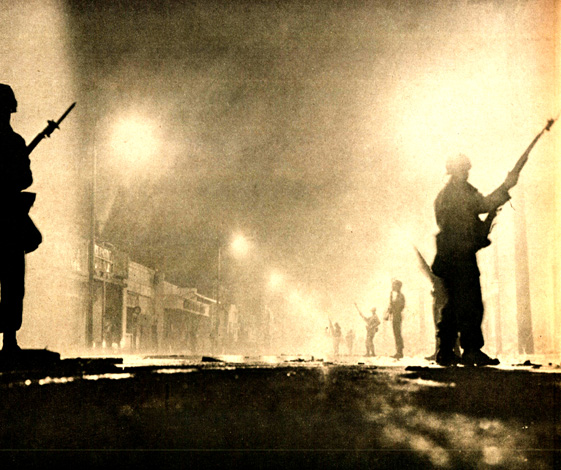 An increasingly familiar site in the 60s.

Riots In America. An increasingly familiar site in the 60s.

If you were living in Los Angeles on this August 13th in 1965 you were no doubt glued to your radio or TV, watching and listening with amazement as the drama unfolded in Watts.

Signaling the first of what would become many long, hot summers in the 1960s, the Watts riots were the wake-up call most cities in America received and further evidence all was not going so well with The Great Society.

Over the course of six days, between 31,000 and 35,000 adults participated in the riots. Around 70,000 people were “sympathetic, but not active.” Over the six days, there were 34 deaths, 1,032 injuries, 3,438 arrests, and over $40 million in property damage. Many white Americans were fearful of the breakdown of social order in Watts, especially since white motorists were being pulled over by rioters in nearby areas and assaulted. Many in the black community, however, believed the rioters were taking part in an “uprising against an oppressive system.”

Issues of poverty, disproportionate unemployment, crumbling infrastructure, racial tensions and police brutality ran fever-pitch throughout the country. The level of frustration was acute. And something as seemingly incongruous as a traffic stop sparked a consuming outrage that threatened daily life in the entire city.

Starting on August 11th and coming to an end on the 17th, the Watts riots took a costly toll of some 34 lives, over 1,000 injuries and some 3,400 arrests. And the estimated toll in damage run over $40 million.

But the riots did something more – they brought attention to a situation that had been going on for some time in Los Angeles; rampant discrimination in housing,  discrimination in employment and a police department which had separated itself from city government, becoming an almost paramilitary organization as the result.

All these elements, in place since the 1950s, had been simmering for several years before finally exploding during this week in 1965.

Here is a 45 minute excerpt from the on-going coverage of events as they were happening on the third day of a riot with seemingly no end in sight.