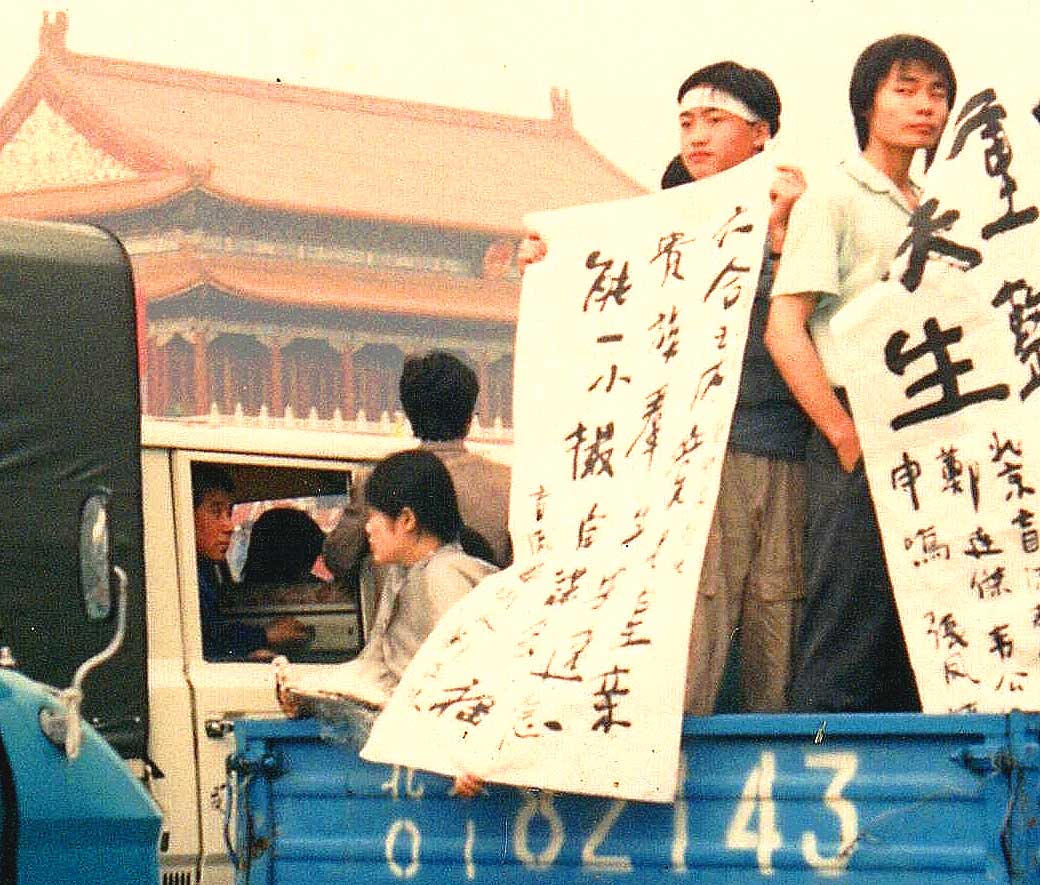 April 23, 1989 – Some Crazy Students In China – Explosions On A Battleship

Student Protests In China: Started out promising, and hardly anybody noticed at first . . .

A momentous week in history, but nobody really knew it at the time. The week of April 23, 1989 was filled with a lot of strife, chaos, students and marathon emotions. So perhaps the news from Beijing didn’t register much on the attention scale, at least for a while anyway.

The momentous news for this week in 1989 started off with reports on April 19th of disastrous explosions aboard the battleship USS Iowa, killing some 47 crew members taking part in Naval exercises near Puerto Rico. The explosion, taking place in one of the 16 in. gun turrets, sent all the power needed to send a 1 ton shell some 20 miles inward, setting off a ghastly chain reaction inside the turret and making it one of the worst battleship accidents ever, surpassing a similar accident during World War 2 which killed some 43 crew members.

In other  news – the trial of Iran-Contra figure Oliver North was wrapping up. The Prosecution offering closing arguments, painting North as a habitual liar and scumbag, while the Defense argued the Prosecution had gone off on a wild tangent in order to obtain a conviction. It was up to the Jury to decide.

Flamboyant Saudi Businessman Adnan Khashoggi got hit with a warrant for his arrest in Switzerland, for his part in the Iran-Contra arms-for-money. Khashoggi was picked up outside a luxury hotel in Berne and taken to the local jail at the request of the U.S. and booked on suspicion of aiding the Marcos regime of the Philippines in hiding money and property somewhere in Manhattan.

More grisly details coming out of Mexico regarding the Voodoo Murders, including reports of blood spattered walls, remains and body parts. Speculation focused on the notion the murders were drug and not ritual related. Still . . . .

And horrific stories were surfacing in Petaluma, California of a father, accused of murder and slashing the throats of his children had many unable to comprehend such actions. The accused father was arrested near Mexico City and extradited within a day of his capture and arraigned on 7 murder charges.

And services were being held for many of the 95 people killed in the previous week’s Soccer Stadium disaster, which took place outside of Sheffield in the UK. Seems the accident was the result of unticketed fans storming a fence, causing it to collapse and trampling and crushing some 95  spectators inside. An inquiry was ordered and there was a lot of blame to go around.

Speaking of blame, the House Ethics Committee had been spending the better part of the previous year looking into the financial dealings of one of its own, House Speaker Jim Wright, and had delivered their verdict – Guilty on five counts of violation of Official Code of Conduct. Wright swore up and down he hadn’t violated any such rules of Conduct.

And Exxon promised to hire some 4,000 people to scrub 300 miles of shoreline, the result of the oil spill in Valdez. And that it expected the job to be done by September. Good luck on that. In the meantime, the Senate began its inquiry on the cause of the Exxon Valdez accident that happened in March which uncovered claims the cleanup crews initially working on the spill were inept at best. The hearings were expected to go for some time.

Which brings the almost unnoticed matter of students in China, gathering in Beijing’s Tiananmen Square. Protestors by the thousands gathered in the square to demand more freedom and Democracy in China. Such a display of students gathering in one place hadn’t happened since the Cultural Revolution in the late 1960s. No comment from the government. Lots of comments from the students.

And 60s protest leader Abbie Hoffman, who died earlier in the week, was found to have committed suicide, rather than the “natural causes” as was earlier claimed. A swarthing dose of Phenobarital, along with a hefty slug of alcohol was apparently the culprit, as per toxicology reports.

And that’s just a tiny portion of the madness called the past week, ending on April 23rd in 1989 . Reported by ABC Radio’s World News This Week.