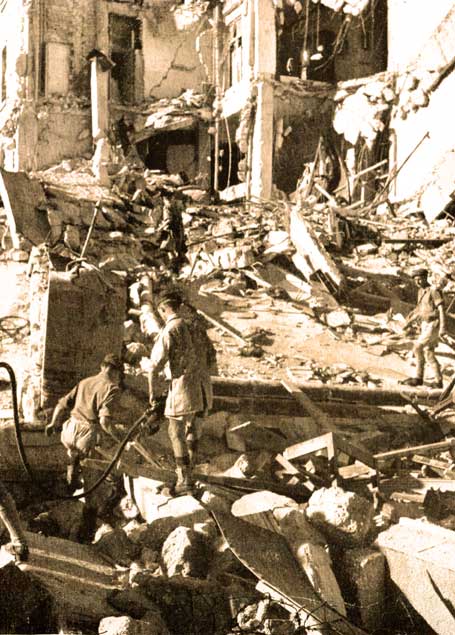 King David Hotel Bombing in Jerusalem - evidence the Palestinian question would be no walk in the park.

King David Hotel Bombing in Jerusalem – evidence the Palestinian question would be no walk in the park.

This July 26th in 1946 was more or less typical for news from the Post-World War 2 period. A lot of tension, strife and readjustment. Glimpses of the Brave New World and harbingers of recurring nightmares.

Starting off with news of the Nuremberg War Crimes Tribunal nearing its end and the U.S. Prosecutor asking for conviction of the Defendants, saying they conspired to wage war against the World ever since the Nazi Party came to power in 1933. The Prosecutor for Britain echoed those sentiments and added the Defendants were nothing more than “common criminals”.

Meanwhile, Arab laborers and British troops were busy in a race against time, searching for survivors of the King David Hotel bombing in Jerusalem which, at the time of this broadcast, claimed 70 lives, 47 injured and 40 still missing.

News of the bombings only underscored the trouble brewing in that region of the Middle East, as the Palestinian question was still being hotly debated. One plan put forth, to establish semi-autonomous areas in Palestine under British administration was outright rejected by Arab leaders and given a frigid reception by Palestinian Jews.

Riots continued for a second day at a Jewish Displaced Persons Camp in Frankfurt with spit flying and bayonets drawn.

On Capitol Hill; The Senate voted to pass control of Atomic Energy and Research to a five person civilian commission. The Senate also voted on, and passed, legislation to streamline Congress. President Truman was expected to gladly approve. The President was not to thrilled, but reluctantly signed anyway, the OPA Bill. The whole question of prices, and controls was a hot-button topic around Capitol Hill.

Reports coming in from Bikini Atoll, site of Atomic Bomb testing said the area was still radioactive, but that high-altitude flights over the test site showed no trace of target ships, USS Arkansas and USS Saratoga, leading speculation that the ships disintegrated in the blast.

On a brighter scientific note – it was predicted that rockets would soon be able to reach the moon.

And the inimitable George Bernard Shaw turned 90 on this day. Much as he was loathe to admit it.

All that and much more from this news and commentary by Walter Kiernan and his Kiernan’s Corner program for ABC Radio, this July 26, 1946.