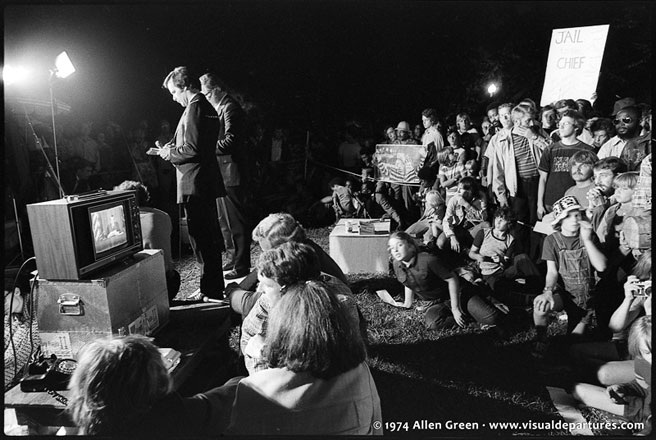 Witness to the End of The Great National Nightmare.

Witness to the End of The Great National Nightmare.

Forty-two years ago today, the Great National Nightmare, as Gerald Ford put it, was over.

After months of investigations, hearings and discoveries, the end of an era had finally come to pass. Speculation had been rife for days over whether or not President Nixon would resign or fight the charges up to the end. But the evidence was overwhelming and, after a day filled with assertions and denials, Press Secretary Ron Ziegler announced that Nixon would go before the American people at 9:00 pm EDT from the Oval Office to announce his decision.

But up to that point it had been speculation and rumor – sightings of influential members of the Republican leadership were seen coming and out of the Oval Office; tight-lipped, but ominous – something was going to happen, but nobody knew exactly when or exactly how – and even up until the last moment, the news was rife with rumor and speculation – it was, in fact, an episode of American history that simply hadn’t happened before. So here is a wrapup of that day, starting with early newscasts regarding a meeting that morning with key Cabinet members and news of the day from ABC, NBC and CBS News all the way to his Resignation address.

It was, if you happen to have been around at the time, and recall the day, something of a nail-biter, and a dramatic assessment of where America stood, from that day forward. It was just not going to be the same again.