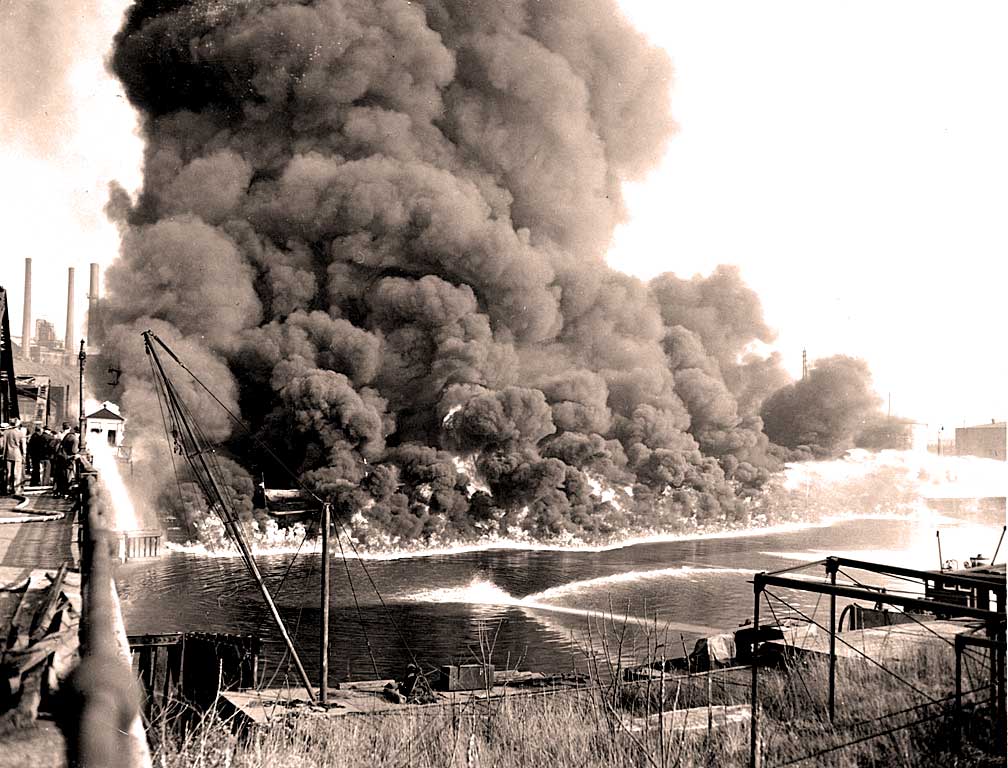 Cuyahoga River in Ohio - it occasionally caught on fire.

Cuyahoga River in Ohio – it was so polluted, that in 1969 it caught fire.

In the 1960s the concern wasn’t so much about Planet Earth running out of water as much as Planet Earth running out of drinkable water. Particularly acute was the U.S., where so much industrial pollution rendered most of the America‘s waterways in severe danger of being poisoned that it was seriously wondering just how long life would go on, if we kept up the pace in 1965.

But even at that, there was a growing concern our water supply was shrinking, fast. Pollution was a major factor, but so was the explosion in population. The world was just becoming a more crowded place than it ever had been, and we were in danger of eventually running into a crisis on fresh water just from the sheer numbers of people needing it to survive. Some parts of the planet were flooding while others were in drought – there was an upset in the balance, and it was concerning to everyone.

Calls for Water conservation and tighter restrictions on Industrial pollution of our rivers were coming from all over the world. Inquiries about desalination of Sea Water into fresh water were brought up. On the one hand, the fresh water we had was rapidly becoming undrinkable and the oceans filled with undrinkable water seemed like one solution – but was it possible?

This 2-part Documentary, produced by ABC Radio and broadcast on November of 1965, asked those questions. Water, Water Everywhere was an investigation of the current crisis in water pollution and the coming crisis in a dwindling supply of water for the inhabitants of the planet.

Scary stuff – scarier to think it’s been going on for almost 50 years. And even though much has changed with reference to Industrial pollution (i.e. the infamous Cuyahoga River in Ohio) and tighter restrictions on industrial waste (a lot of which has been deregulated in recent years), the ominous aspect is one we can’t get around or avoid – Climate Change.

So in 1965 it was becoming a concern – and there were calls to take action. 2014 the crisis has only intensified. But in 1965 they were talking about it and not pretending a problem didn’t exist.

Here is that 2-Part Documentary, as aired in November of 1965 and recorded in July of that year.