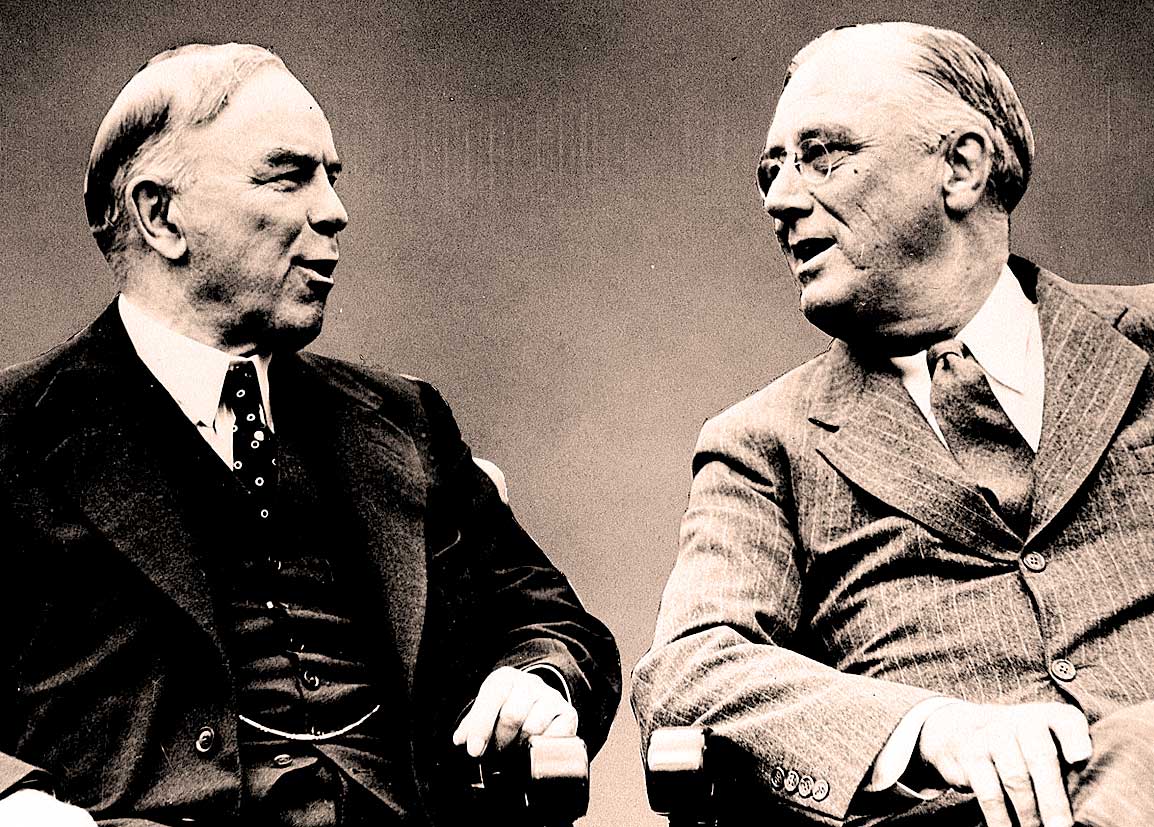 FDR and Canadian Prime Minister MacKenzie King - giving an assessment of the Quebec Conference in 1943.

FDR and Canadian Prime Minister MacKenzie King – giving an assessment of the Quebec Conference in 1943.

On this August 25th in 1943, President Roosevelt addressed the Canadian Parliament in Ottawa on the occasion of concluding the Quebec Conference with UK Prime Minister Winston Churchill and Soviet Premier Stalin. The War was making progress and the allies were slowly winning – but it wasn’t without struggle. Here is a text excerpt from the complete speech, as it was broadcast, this day in 1943:

President Roosevelt: “It was exactly five years ago last Wednesday that I came to Canada to receive the high honor of a degree at Queen’s University. On that occasion- one year before the invasion of Poland, three years before Pearl Harbor— I said:

“We in the Americas are no longer a far away continent, to which the eddies of controversies beyond the seas could bring no interest or no harm. Instead, we in the Americas have become a consideration to every propaganda office and to every general staff beyond the seas. The vast amount of our resources, the vigor of our commerce and the strength of our men have made us vital factors in world peace whether we choose it or not.”

We did not choose this war—and that “we” includes each and every one of the United Nations.

War was violently forced upon us by criminal aggressors who measure their standards of morality by the extent of the death and the destruction that they can inflict upon their neighbors.

In this war, Canadians and Americans have fought shoulder to shoulder—as our men and our women and our children have worked together and played together in happier times of peace.

Today, in devout gratitude, we are celebrating a brilliant victory won by British and Canadian and American fighting men in Sicily.

Today, we rejoice also in another event for which we need not apologize. A year ago Japan occupied several of the Aleutian Islands on our side of the ocean, and made a great “to-do” about the invasion of the continent of North America. I regret to say that some Americans and some Canadians wished our Governments to withdraw from the Atlantic and the Mediterranean campaigns and divert all our vast supplies and strength to the removal of the Japs from a few rocky specks in the North Pacific.

Today, our wiser councils have maintained our efforts in the Atlantic area, and the Mediterranean, and the China Seas, and the Southwest Pacific with ever-growing contributions; and in the Northwest Pacific a relatively small campaign has been assisted by the Japs themselves in the elimination of that last Jap from Attu and Kiska. We have been told that the Japs never surrender; their headlong retreat satisfies us just as well.

Great councils are being held here on the free and honored soil of Canada- councils which look to the future conduct of this war and to the years of building a new progress for mankind.

To these councils Canadians and Americans alike again welcome that wise and good and gallant gentleman, the Prime Minister of Great Britain.

We have talked constructively of our common purposes in this war-of our determination to achieve victory in the shortest possible time—of our essential cooperation with our great and brave fighting allies.

And we have arrived, harmoniously, at certain definite conclusions. Of course, I am not at liberty to disclose just what these conclusions are. But, in due time, we shall communicate the secret information of the Quebec Conference to Germany, Italy, and Japan. We shall communicate this information to our enemies in the only language their twisted minds seem capable of understanding.

Sometimes I wish that that great master of intuition, the Nazi leader, could have been present in spirit at the Quebec Conference- I am thoroughly glad that he wasn’t there in person. If he and his generals had known our plans they would have realized that discretion is still the better part of valor and that surrender would pay them better now than later.

The evil characteristic that makes a Nazi a Nazi is his utter inability to understand and therefore to respect the qualities or the rights of his fellow men. His only method of dealing with his neighbor is first to delude him with lies, then to attack him treacherously, then beat him down and step on him, and then either kill him or enslave him. And the same thing is true of the fanatical militarists of Japan.

Because their own instincts and impulses are essentially inhuman, our enemies simply cannot comprehend how it is that decent, sensible individual human beings manage to get along together and live together as good neighbors.

That is why our enemies are doing their desperate best to misrepresent the purposes and the results of this Quebec Conference. They still seek to divide and conquer allies who refuse to be divided just as cheerfully as they refuse to be conquered.”

And a year from this day, the Allies would be marching into Paris – but that was a long ways off – an eternity to some. Here is that complete address, along with opening remarks by Canadian Prime Minister Mackenzie King as it was delivered to Parliament in Ottawa on August 25, 1943.