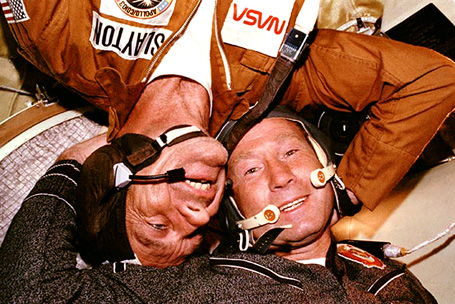 Apollo-Soyuz - A first, but also a few lasts.

Apollo-Soyuz – A first, but also a few lasts.

As life on Earth swirled around in its usual madness, life in Outer Space was swirling around in harmony, this week ending on July 20, 1975. The historic linkup and handshake in space by crew members of the U.S. Apollo Space Mission and the Soviet Soyuz 19 space mission, was a first and important milestone in East-West relations. Sadly, the mission soon ended and NASA abandoned the Apollo program in favor of developing the Space Shuttle and the Cold War went back to its former frigid state. But for some 44 hours, all was calm and bright in the skies and heavens above earth.

But back on Earth – The Middle East was in turmoil, again. With Egypt’s Anwar Sadat issuing protests to the UN Security Council over its troops on Egyptian soil. Secretary of State Henry Kissinger chimed in with some harsh words for the non-aligned, Third World nations over the issue of the Middle East. A bit further West, political trials and tribulations were springing up in Portugal regarding the recent upheavals in that country, with the Big “C” word (Communism) rearing it’s familiar head. And further South, the former Portuguese African colony of Angola was going through its growing pains. And yes, another one of those “dreaded C-word” takeovers was being talked about.

Meanwhile, back in the States; President Ford proposed a phase-out of Price Controls on Domestic Oil Production by 1978. This brought an avalanche of criticism from members of Congress and promises of a “not” vote by Democrats. Ford promised to Veto the Veto.

But all that took backseat, at least for a little while as we saw, live on TV, the dramatic linkup of Apollo-Soyuz and the handshake between East and West in, of all places, outer space.

And that’s some of what went on this week, ending July 20, (a Sunday) in 1975 as presented by CBS Radio’s The World This Week.