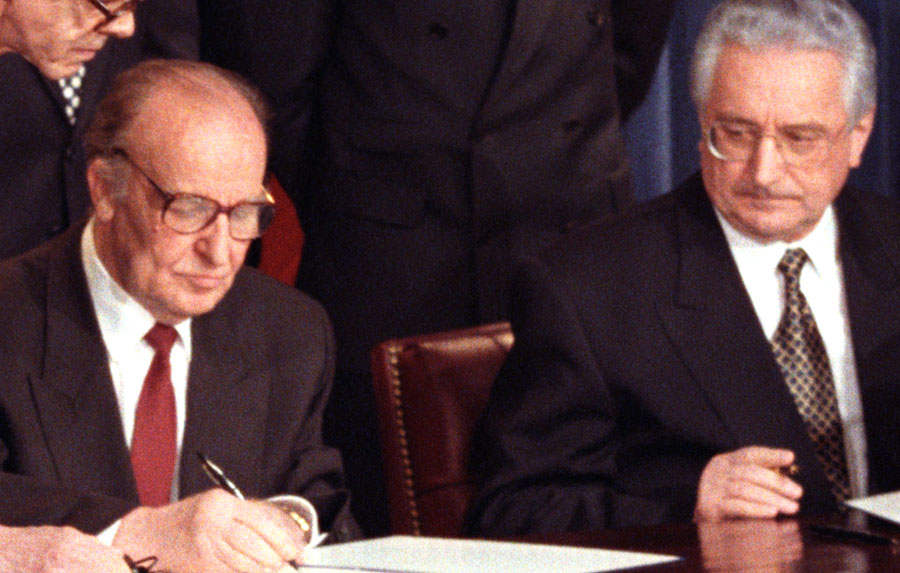 If they would only stop killing each other . . . .

If they would only stop killing each other . . . .

There were glimmers of hope, this March 18th in 1994. In a historic first-step, warring factions which had been tearing apart Bosnia-Herzegovina finally signed an accord, ending the bitter and horrific civil war that had gripped the tiny country.

Although still a ways to go before a real peace settlement was at hand, this at least was an important step in making that become a reality.

While President Clinton looked on, Bosnia President Alija Izetbegovic and Croatian President Franco Tudjman signed the agreement which sealed their Federation within non-Serb parts of Bosnia and later, in principle with Independent Croatia.

And while peace was at hand in Eastern Europe, the fabled White Water hearings were gearing up to take place on Capitol Hill. The Senate passed a resolution allowing the hearings to proceed. Senor Presidential aide George Stephanopoulos was subpoenaed to appear before the Grand Jury and a lively hunting season was about to begin.

Former President Reagan was jumping into the Virginia Senate Race with a stinging denunciation of former Iran-Contra figure Oliver North. It seems North was alleged to have said during a CBS News interview that his boss told him to sandbag the hearings. Reagan went ballistic. North pulled a Reagan and said he didn’t remember ever saying that.

And the FBI was trying to take advantage of the Information Superhighway in order to catch criminals, by using advanced surveillance techniques to gain access to Computer files and e-mails of “interested individuals”. But Capitol Hill was eager to put the brakes on Intelligence gathering via the Internet. Hearings were taking place to determine whether or not Uncle Sam was angling to become Big Brother anytime soon. Well . . . .

And that’s just a small sample of what went on this March 18th 1994 as reported by The CBS World News Roundup.